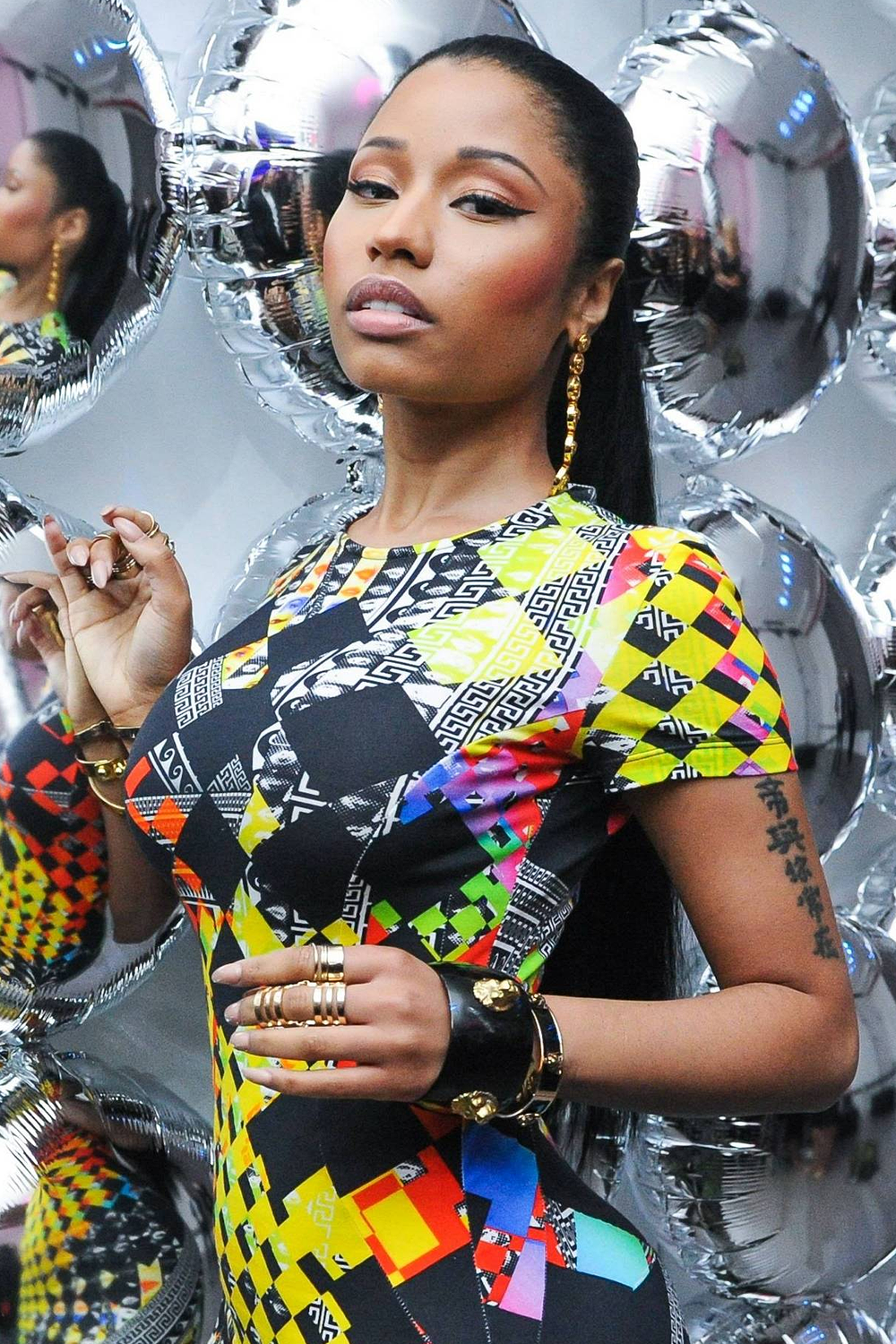 Nicki Minaj sporting a Vercace / Vaccarello collaborative piece from the Versus line. 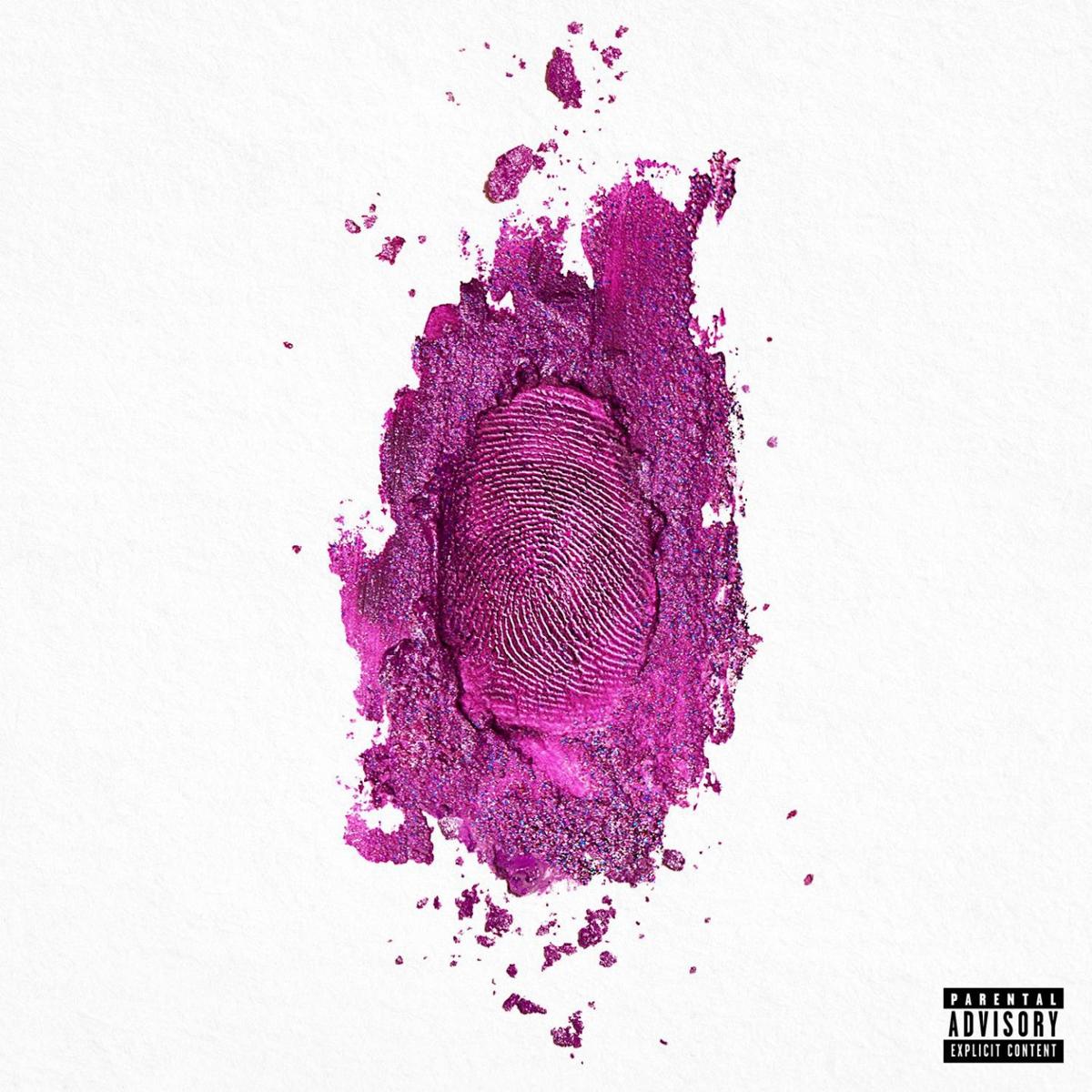 Nicki Minaj sporting a Vercace / Vaccarello collaborative piece from the Versus line.

Staying up on today's pop music requires us to care about too many tempests in too many teapots. Any superstar worth their weight in Twitter followers has an assortment of dramas brewing at any given moment, and this year, Nicki Minaj's long boiled hotter than most.

A very incomprehensive recap: In August, she was scolded for showing too much booty in her yuk-yuk video for "Anaconda." In November, the Anti-Defamation League criticized her use of Nazi imagery in the not-so-yuk-yuk video for "Only." Along the way, there were whispery keystrokes about an alleged split between the rapper and her secret 10-year-husband. And there were some new songs on the radio, too.

If you're a fan, these little sagas can be bent into a heroic narrative arc. If you're a skeptic, they're pseudo-controversies posing as hype. And if you're somewhere in between, they slowly accumulate into a weird tumor of anticipation, a hurdle that Minaj's music must eventually clear.

Which means that her third album, "The Pinkprint," arrives with an unfair amount of work to do — and that's too bad because the woman sounds exhausted. She's a pop star capable of wielding her charisma like a Taser, but here, she's muddling through a pile of messy feelings, suddenly unaware of her own strengths.

"I still love," Minaj sings repeatedly on the power ballad "Pills N Potions," as if trying to talk her heart back into functioning properly. Or perhaps she's just trying to talk the song up the charts. The refrain is mawkish and the rapping that surrounds it is worse — enough to rekindle the debate over whether Minaj should be channeling her life force to nasty rhymes or sweetly-sung pop hooks.

The suggestion that she must choose — a notion perpetuated by her beef with New York radio host Peter Rosenberg two summers ago — has always seemed ridiculous. Today, pop's boundaries are more fluid than ever and Minaj is obviously entitled to represent the complexity of her creativity however she sees fit.

But throughout "The Pinkprint," she continues to put most of her eggs in the pop basket, and with diminishing returns. Instead of flaunting her audacity or wit, she shuffles between lifeless party anthems ("The Night Is Still Young," "Anaconda") and maudlin break-up ballads ("I Lied," "Grand Piano").

Meantime, her most dexterous rapping is spry and amusing, even when she seems to be sleepwalking through her verses. On "Feeling Myself," a standout duet with Beyoncé, she boasts that she "ain't gotta rely on top 40" — proving that she's self-aware, comfortable with her greatness as a rapper and would rather spend her time getting better at conquering Popland. (The problem is she isn't.)

But the song that best captures Minaj's predicament comes first: "All Things Go," a somber confession that alludes to a rocky marriage, a teenage abortion and a string of strained relationships with her immediate family. For a rapper who's blended fantasy and autobiography in thrilling ways, this might be her most blunt transcription of reality.

And on the surface it seems brave. But as music, it feels lazy. Minaj delivers these difficult truths over a dull beat, and in a stiff, matter-of-fact flow that presumes the listener is already an invested participant in the greater Nicki Minaj conversation. Instead of giving us something great to listen to, she's giving us something heavy to talk about.

Don't mistake that as audience empowerment. When music becomes mere conversation fuel, it wastes its potential to do more mysterious and important work. Something magical becomes something mundane.

Is it sustainable? Can a 21st-century pop career float on a storyline instead of a songbook? Maybe it can, so long as the story continues to feed our sense of hope. This wayward album doesn't mean that Minaj is any less capable of future excellence. But as listeners and fans, our optimism can lead us into a fog of chatter and hype that may never completely lift. With the payoff always on the horizon, we commit ourselves to a state of perpetual anticipation.

So instead of living up to the talk, "The Pinkprint" simply fuels more of it. That might be precisely its point.