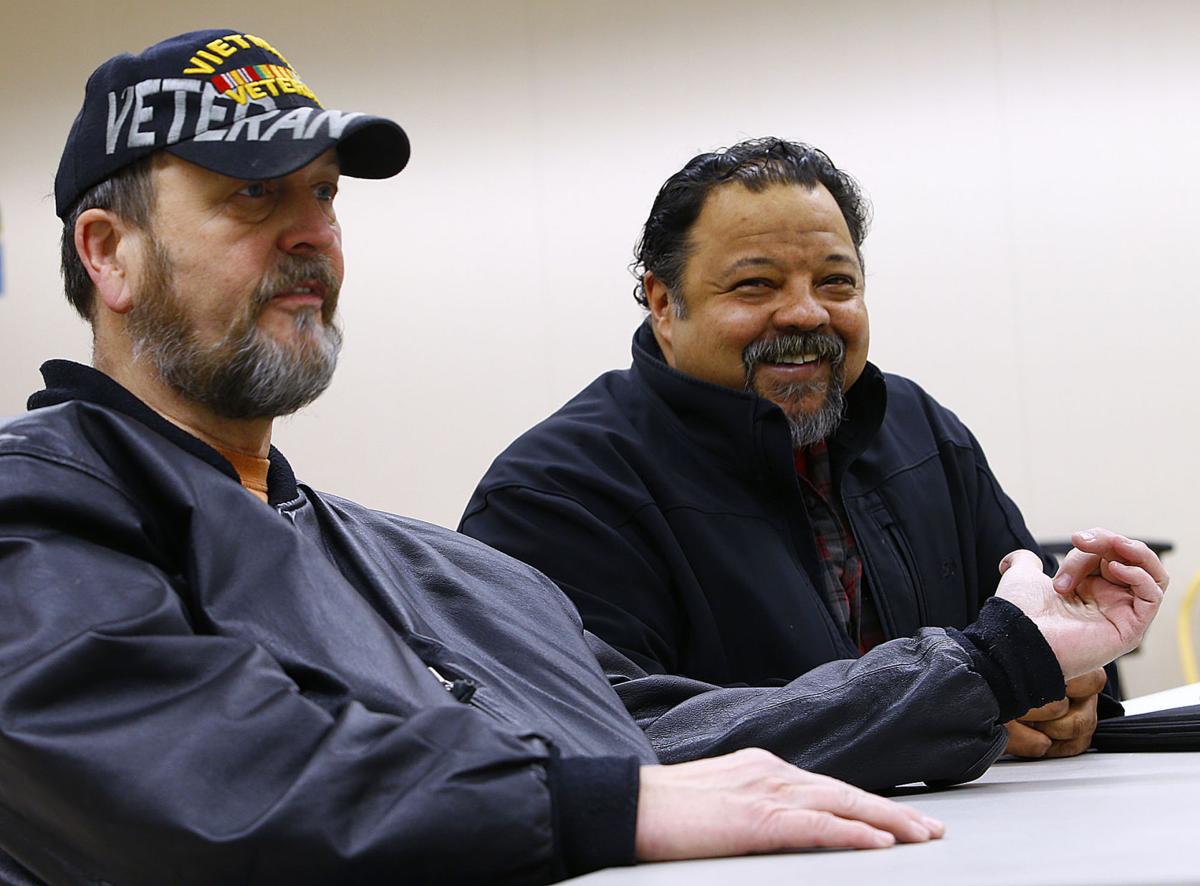 Chris Washington found out recently that Jerry Paul is his half brother. They tell their story on Monday Feb, 2, 2015. Tim Bath | Kokomo Tribune 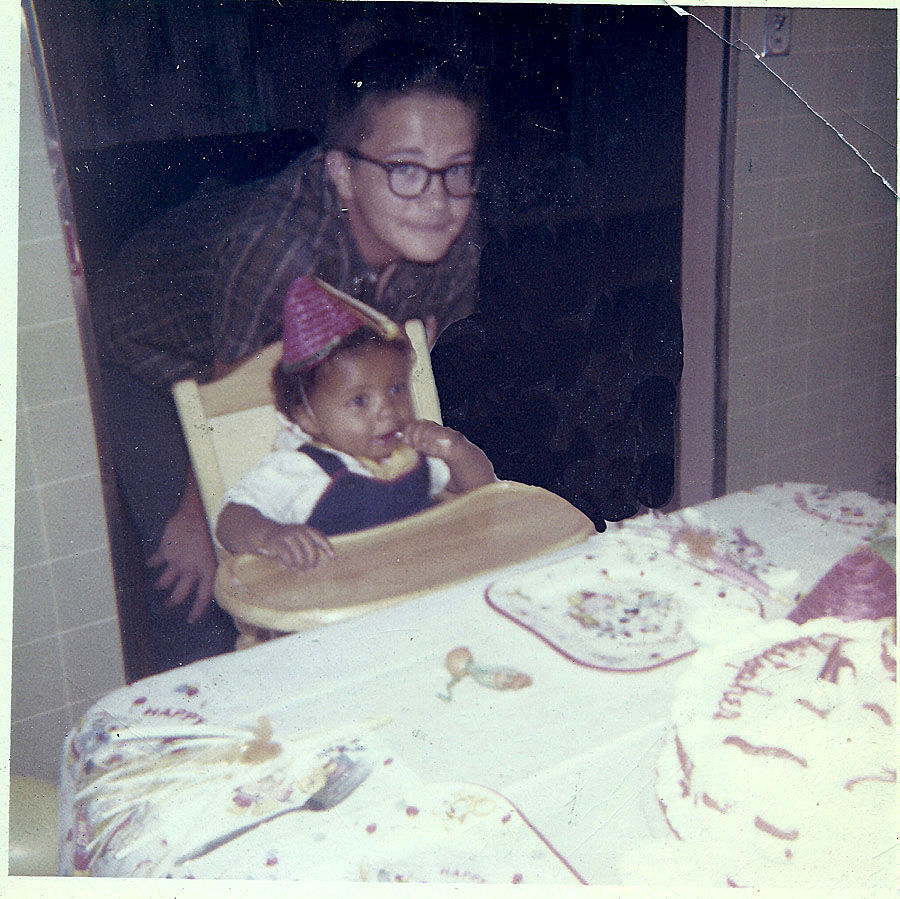 Chris Washington found out recently that Jerry Paul is his half brother. They tell their story on Monday Feb, 2, 2015. Tim Bath | Kokomo Tribune

Jerry Paul and Chris Washington may be half brothers, but for half a century they were two strangers living in the same city.

Due to the realities of a racially insensitive era, Paul, 66, and Washington, 52, both fathers of three, were separated before Washington turned 1 year old.

And while race may have caused their separation, it certainly hasn't hindered their new relationship.

The two men - Paul, a white man, and Washington, a multiracial man who self-identifies as African-American - couldn’t look more different, but as their story reveals, there are similarities.

Paul, a Vietnam War veteran and retired Chrysler union steward, and Washington, owner of CounterClockWise Computer Service and a professional musician, eventually found their way back together, but their journeys were filled with a variety of questions and cultural anxieties.

In September 1962, Paul, then 13 years old, was living with his family in Kokomo, Indiana's Gateway Gardens, experiencing what he described as a relatively conventional childhood.

“It was normal growing up,” Paul said. “I would do a lot of typical things.”

Later that month, Washington was born, and was put up for adoption before his first birthday.

“At that time, Gateway Gardens was for white people and Dunbar Court was for black people,” Paul said. “The adoption was basically about the time. If my mother would have kept Chris, we would have gotten kicked out of Gateway Gardens. There wouldn’t have been any place we could have lived where Chris would’ve been accepted. His childhood would definitely have been a lot different than the childhood he had after he was adopted.”

Washington’s adoption came without the struggles present in many contemporary adoptions, Washington said, and he joined a new family within a few months of being born.

“Back then the laws were different,” Washington said. “All you needed were two parties and a lawyer, and you could get a child. It is not like it is today with agencies.”

Washington was adopted by Jerdie and Hobart Washington, a black couple in their late 50s living in Kokomo.

“They were good Christian folks, and I had a great childhood,” Washington said. “They were long on love and long on discipline. You didn’t question them, and they never really talked about me being adopted.”

Paul and Washington’s mother kept in touch with Washington’s adoptive parents, but not long enough for Washington to comprehend the significance of her visits.

“Our mother still had a relationship with the people that adopted me,” Washington said. “She continued to visit from time to time.”

Paul can be seen posing with Washington in a photo taken during the party celebrating Washington's first birthday.

It would take 11 years for the brothers’ paths to cross again.

When Paul was in his early 20s, he enjoyed playing basketball at Kokomo’s YMCA. One day, he saw a familiar face.

“I used to go up there to play basketball all the time, and one time I was just shooting by myself,” Paul said. “There were a bunch of guys down on the other end playing, and then a little guy came on down to my end.”

That little guy was Chris Washington.

“For some reason, I have this thing about faces,” Paul said. “I was looking at him and I asked him his name, and he told me it was Christopher Washington. As soon as he said that, I knew he was my little brother.”

Paul didn’t reveal to Washington the nature of their relationship, choosing instead to let time run its course.

“I didn’t say anything to him, because he was 12 years old,” Paul said. “If I would’ve told him he was my little brother, he would’ve gone home and said, ‘Mom, this white guy at the Y told me he was my big brother.’ I didn’t want to confuse the kid.”

Washington discovered his adoption when he was 17. Close to 35 years later, Paul would fill in the rest of the blanks.

Kokomo's Gilead House, which provides outreach programs and services for people recovering from substance dependency, is a place both Washington and Paul are familiar with, albeit for different reasons.

“Reba introduced him as Chris Washington, and I just smiled and didn’t say anything,” Paul said. “He started talking, and he just blurted out that he was adopted.”

At the time, Washington was unaware of who he had been introduced to. The encounter faded into the back of his mind.

“I didn’t think anything about it,” Washington said. “I was just there to work on the computers, and then Reba came into the office and told me she didn’t know I was adopted. She asked me then if I had any interest in finding out who my family is. At the time, I just felt like if it was meant to happen, it would happen.”

Following the introduction, Paul spoke with Harris, informing her of the brothers’ relationship.

“I went back and I told Reba that I had something to tell her, and she wouldn’t be able to tell anyone,” Paul said. “I went into her office and told her that the man fixing her computers was my little brother.”

Close to two months later, Paul and Harris organized a meeting with the intention of reuniting the two brothers.

“It took me a while to process what had happened, and I told Reba that I would tell her when it was time,” Paul said. “I finally told her one day to go ahead and set it up. My philosophy was that he had a right to know where he came from. It was like Chris’ life was an incomplete circle, and he had no control of that circumstance.”

“I came into her office and she was grinning at me,” said Washington. “She asked me if I knew why I was there, and I told her I didn’t. I was just sitting there, and she told me she had someone she wanted me to meet.”

At that time, Paul entered the room carrying an assortment of family pictures.

“It dawned on me when I saw him that this was big,” Washington said. “This isn’t something that I really worried about, but it is something that is always with you that you wonder about. I thought, ‘Man, this is the day.’ I had a smile on my face the whole time."

Paul, on the other hand, had tears in his eyes.

“I had this speech all lined up and I was trying to be cool about it,” Paul said. “I had it all ironed out, and I just choked up. I get really emotional about certain things, and the fact that I had had contact with him and never said anything to him was really big.”

Finally, the two men had the conversation they had waited on for decades.

“I asked him if he knew who his family was, and he said he thought he knew what his mother’s name was,” Paul said. “I began to describe our mother and it all got very emotional.”

And while Paul spoke, Washington said he attempted to soak in as much information as possible.

“For me, the conversation consisted more about listening,” Washington said. “I asked questions about the facts and what I know, but I mainly listened to what Jerry had to say. It was just a revelation, because I was learning the answers to things I never thought I would. It was incredible.”

Today, the brothers may not spend holidays together, but they communicate often, whether it’s over the phone or at Half Moon Restaurant & Brewery.

“He’s busy, because he’s one of those guys who are committed to giving,” Washington said. “I’m busy because I’ve got music, my computer business and kids, but we kind of click. I feel like this is my big brother. I feel like he’s family.”

Their children have also embraced the new family dynamic.

“All of our kids are friends,” Paul said. “Sometimes, I think they are the most excited about this.”

The cohesiveness of the two families has been a blessing, said Washington.

“This has added to the family,” Washington said. “It has added branches to the trees. His kids call me Uncle Chris. How can that not affect you in a positive way?”

And for Paul, Washington’s happiness has brought about a true peace of mind.

“To see how happy he is makes me happy,” Paul said. “I can’t even imagine being at the Gilead House and seeing him and still keeping that secret. I want to get to know him because he’s a great guy. Why wouldn’t you want to get to know a good person? It’s all about character; it’s not about color.”

Paul and Washington hope their story can touch others who may find themselves in a similar situation.

“We hope that our story reaches out to other people,” Paul said. “With all the negativity in the world today concerning race, we think this could help. Here are men of different racial backgrounds completing their story.”