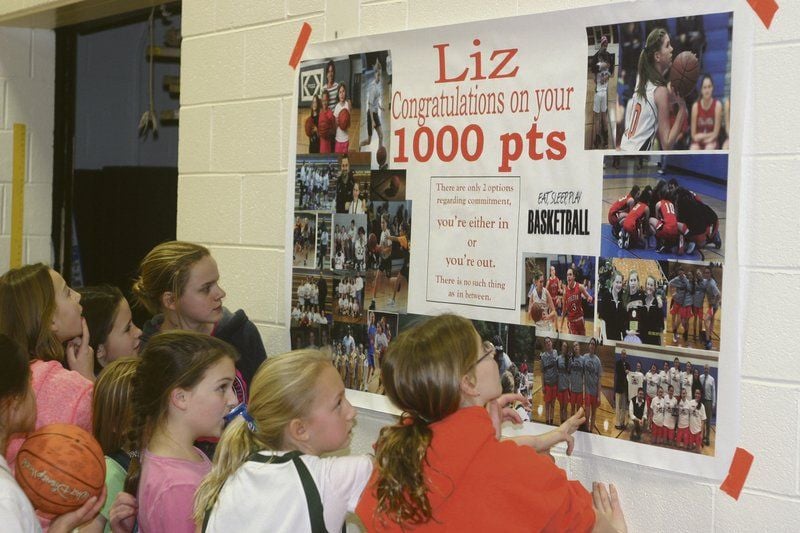 Greg Klein | The Cooperstown CrierCooperstown Elementary School students check out a poster celebrating Liz Millea’s accomplishments after Millea topped 1,000 varsity points on Jan. 31. Millea is a favorite of many of the younger girls. 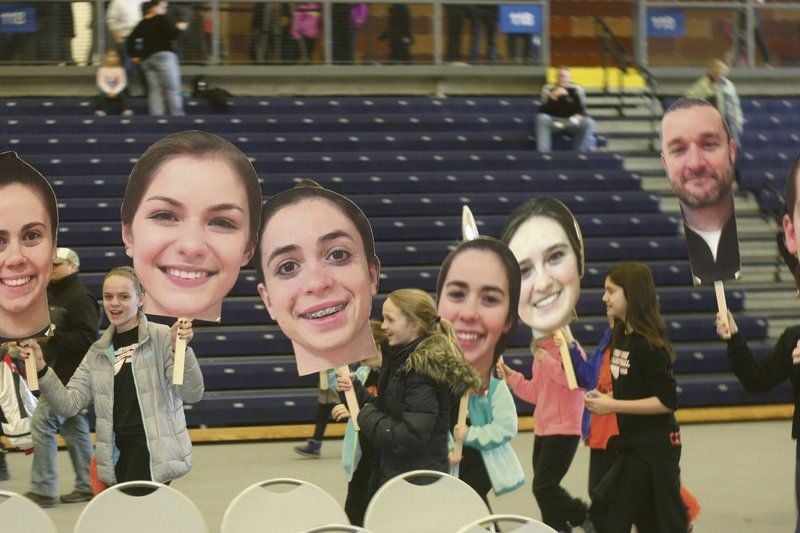 Cooperstown Elementary School students cheer for the Hawkeyes at the Section Three Class C finals at Onondaga Community College in Syracuse on March 7. The girls are carrying cardboard Fathead pictures of the players and coaches.

Greg Klein | The Cooperstown CrierCooperstown Elementary School students check out a poster celebrating Liz Millea’s accomplishments after Millea topped 1,000 varsity points on Jan. 31. Millea is a favorite of many of the younger girls.

Cooperstown Elementary School students cheer for the Hawkeyes at the Section Three Class C finals at Onondaga Community College in Syracuse on March 7. The girls are carrying cardboard Fathead pictures of the players and coaches.

For the Cooperstown girls basketball team, some of its biggest fans are the little ones.

“They’re really inspiring,” 11-year-old Carly Erway said. “They work so well together, and they have such good friendships with each other.”

“It is great for us to see that,” 11-year-old Anna Lambert said. “They are such great role models.”

Anna, Carly and a dozen other CCS Elementary School girls talked about the CCS varsity girls basketball team Monday at The Clark Sports Center, where the younger girls play and the older girls, the Section Three Class C champions, sometimes coach them.

Cooperstown will play in the state semifinals at 12:30 p.m. Saturday against Chautauqua Lake. The winner will play for the Class C state championship at 11:45 a.m. Sunday. All the games will be at Hudson Valley Community College in Troy.

In the crowd Saturday will be lots of girls who play basketball at The Clark.

Seven years ago, in 2008, many of the varsity girls were sitting in the crowd watching the last Cooperstown girls basketball team to make the final four. Cooperstown lost to Haldane in the semifinals.

“Jen (Flynn), Mallory (Arthurs), Liz (Millea) and Addy (Lawson of Milford) were sitting in the stands with me,” Clark Sports Center assistant athletic director Scott Whiteman said. “They could pick out everything that was going wrong with that game as it was happening.

“They said that they would be there some day, and I had to believe them,” Whiteman said.

Varsity players Millea and Maggie Schuermann coach the young girls, and some of the other Hawkeyes visit the gym to see games or attend Midnight Madness, the annual start of the season. The varsity girls get high praise for their ability to coach.

“I like when they coach us because they definitely help us improve our basketball skills,” 10-year-old Ashlyn Wolfe said. “We can watch them and get better at it.”

The younger girls have favorites, although “I like them all,” often got mentioned, too. Millea was the top pick.

“Liz is like my idol,” 11-year-old Madison Hayes said. “She inspires me to keep playing no matter what. She does not stop.”

“(Liz) was helping me learn something,” 10-year-old Hartland Frable said, “the three-man weave. She works so hard and she doesn’t give up.”

Some of the other Hawkeyes were favorites, too.

“I like Juliette Ford,” 10-year old Addy Lewis said. “She has a lot of really good rebounds.”

Even one of Schuermann’s little sisters favors the Cooperstown starters.

“I like Liz and Jen and Julie,” 10-year-old Meagan Schuermann said. “Liz’s really fast. Jen, she helps us with our basketball at Midnight Madness. Julie, she’s a really good rebounder.”

When asked if Maggie was one of her favorites, Meagan laughed and said, “I’m going to be better than her.”

The younger girls learn by watching, they learn from the older girls coaching and the hope is they learn that going to the state tournament is just something that Cooperstown does.

“The goal has always been that we don’t ever want to have to rebuild,” Whiteman said. “We want to reload.”

The younger girls have been at games all season. They mobbed Millea for pictures on Jan. 31, after the junior guard broke 1,000 varsity points. At playoff games, they carry the Fatheads, the cardboard faces of the team members and coaches.

“I have heard from the girls that it definitely helps the team,” Ashlyn said. “It encourages the team to do well in the games.”

The playoffs have brought the girls a nervous moment or two, such as the third quarter Saturday when Watkins Glen used a box-and-one defense on Millea to get back into the game.

“I got kind of nervous at the beginning (of the fourth quarter),” 9-year-old Hannah Craig said. “They weren’t ahead by much and the other team was catching up.”

Cheering for Cooperstown can be risky, too. Carly had a Saturday night performance with the Fly Creek Philharmonic, but she spent the afternoon cheering.

“I was screaming really loud, I almost lost my voice,” Carly said. “I was worried, but I (was able) to do the show.”

Most of the girls think Cooperstown will prevail on Saturday against Chautauqua Lake, despite the Thunderbirds being the defending Class C state champs, but not everyone was comfortable expressing a prediction.

Others were less hesitant.

If somehow the Hawkeyes don’t come home with a state title, the girls say they will feel bad for senior Christina Noto.

“The others have a chance to come back again,” Melissa said. “Christina won’t get to come back.”

Whatever the result this weekend, however, the varsity girls will still have their fans at the gym.

“I want to be like them someday,” 12-year old Ellie Hotaling said.