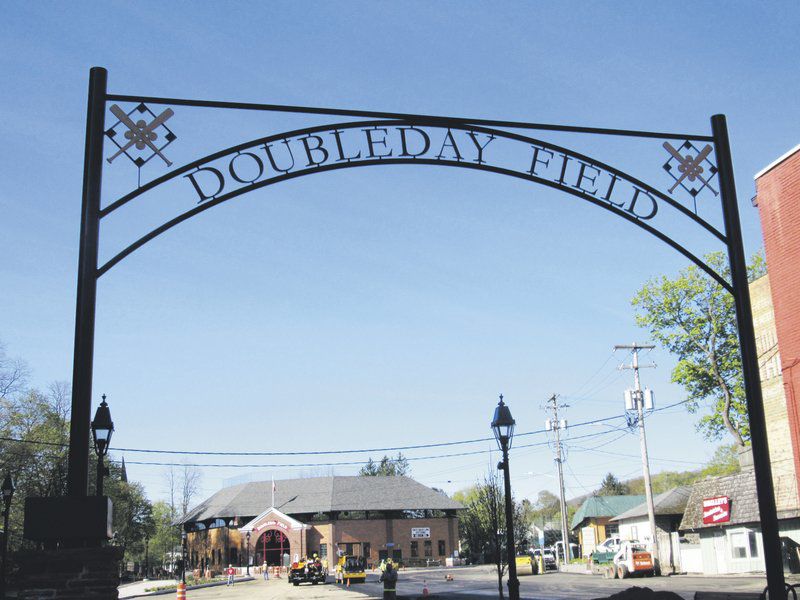 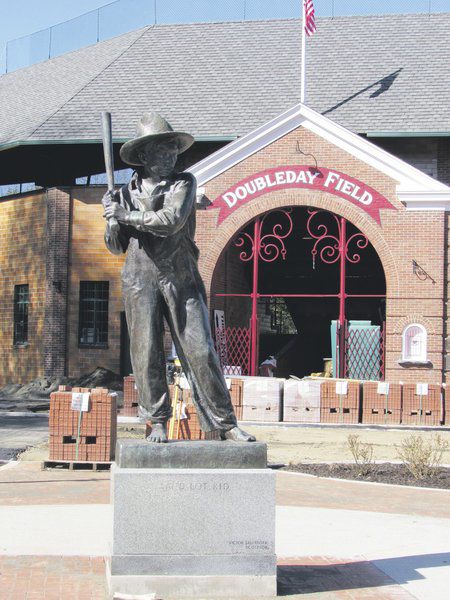 Greg Klein | The Daily StarConstruction at Doubleday Field in Cooperstown has continued during the coronavirus pandemic, including moving the Sandlot Kid statue closer to the stadium.

Greg Klein | The Daily StarConstruction at Doubleday Field in Cooperstown has continued during the coronavirus pandemic, including moving the Sandlot Kid statue closer to the stadium.

The grand unveiling of the Doubleday Field renovations in the village of Cooperstown was supposed to take place last weekend.

The coronavirus pandemic canceled those plans, as well as the National Baseball Hall of Fame and Museum’s 2020 Hall of Fame Classic Game scheduled for Saturday, May 23, but the first two phases of the baseball field’s renovation are almost finished and Cooperstown Mayor Ellen Tillapaugh said she is thrilled with the new look in and around Doubleday.

“Everyone has been saying how wonderful it looks, and it does,” Tillapaugh told The Daily Star in a phone interview on Thursday, May 21. “The minute the arch went up, it really defined it.”

A new metal archway on Main Street has a nameplate across the top, alerting visitors to the entrance to the Doubleday Field area. A sidewalk extends from Main Street to the area just before the stadium entrance, and includes a small promenade with benches, plants and Victor Salvatore’s “Sandlot Kid” statue.

The statue, which was erected in 1964, had been closer to Main Street, in the shadows of the Key Bank Building, but now it is in front of the stadium.

There is new lighting outside the stadium and ground lighting inside the historic grandstand, which was built in 1938. There are other new safety features in the grandstand, including handrails. The entire grandstand has been scrubbed and shined, Tillapaugh said.

“It is very exciting to see the first two phases done,” Tillapaugh said, “and now we can concentrate on what needs to be done for the third-base line as well.”

The concrete third-base bleachers were demolished at the beginning of the project, but the demolition revealed unexpected problems, Tillapaugh said. It turned out the 1950s project was built without a solid foundation.

“There was no bedrock,” she said, “which is why the cement bleachers shifted and cracked.”

An unplanned soil remediation added $622,000 to cost of the project, which had originally been projected to cost $5.8 million.

The state paid for most of the field’s renovations, with $3 million coming from the Empire State Development Fund and $1 million from the State Municipal Facilities Program. Another $300,000 for the project came from the village’s sewer and water fund, Tillapaugh said.

The remainder of the funds are being raised by a non-government group, Friends of Doubleday Field.

The extra costs, including some other small overruns from the original $5.8 million estimate, may cause the third-base building to be built on a smaller scale than originally anticipated, Tillapaugh said.

In April, the village’s Board of Trustees approved a $21,000 survey from Saratoga Associates and Delaware Engineering to “value engineer” the third-base building and figure out the most cost-effective way to finish phase three, which will conclude next year, Tillapaugh said.

The planned celebration last weekend included a special first-day postage stamp cancellation by the United States Postal Service, which went on as planned, even without a celebration or crowds.

Tillapaugh said she still thinks there could still be a 100th anniversary celebration for the field in September on the official anniversary of the field’s first game.

According to the history of the field, which is listed at www.friendsofdoubleday.org, the Cooperstown Chamber of Commerce bought Elihu Phinney’s lot in 1919 and christened it Doubleday Field, after former Cooperstown resident Gen. Abner Doubleday. Doubleday had often been credited with inventing baseball and playing the first game on Phinney’s lot in 1838, but historians have debunked that claim.

The official first game on the field was played Labor Day, Sept. 6, 1920, between teams from Cooperstown and Milford. The lot was sold to the village of Cooperstown three years later. The grandstand was built soon after to commemorate “the 100th anniversary of Doubleday’s game” in 1938.

“Sept. 6th, hopefully, if we’re more opened up by then, wouldn’t it be great to have a small reception then?” Tillapaugh said. “We would love to see something like that happen.

“Everything looks great, and we can all enjoy it, but there has been no acknowledgement or celebration,” she continued. “So we would love to be able to show it off for the real anniversary.”