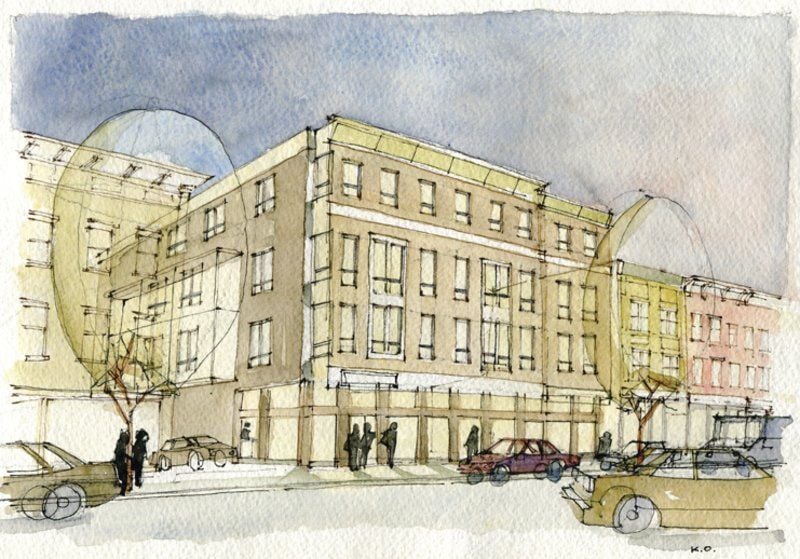 The proposal for a luxury hotel on Main Street will face its first exposure to the public on May 5.

On April 7, the Zoning Board of Appeals set a public hearing for 5 p.m. on Tuesday, May 5 in the village meeting room at 22 Main St. The board will consider a zoning variance for the project, which is proposed to be four stories and 48 feet tall. Village rules allow for a building to be 3.5 stories or 42 feet tall.

Batter’s Up Restaurant rents the current building, which was built in 1986 and is best known for being the home of T.J.’s Restaurant.

The zoning board also discussed parking issues for the hotel. The blueprints call for a 31-space parking lot to be built behind the hotel. The hotel would have valet parking with an entrance into the hotel from the lot.

The hotel is being proposed by the owners of the property, BTP Cooperstown LLC. The three principals of BTP Cooperstown LLC, Bob Hurley, Tom Lagan and Perry Ferrara, attended the village’s March 23 meeting. Lagan and architect Teresa Drerup of Altonview Architects spoke at the meeting about the project.

In September, BTP Cooperstown bought the building next door to the hotel site, 134 Main St. The historic building shares the alleyway with the hotel site.

In January, in a separate investment, BTP Cooperstown bought the Key Bank building, 103 Main St., which is across the street from the proposed hotel and next to the Hard Ball Cafe.

Lagan works in Albany, but owns a house in the village. Hurley owns Subway restaurants in Richfield Springs and Hartwick, and is a regional manager for the chain. Ferrara lives in Otsego County and owns the Heroes of Baseball Wax Museum. His wife, Catherine Ferrara, who also attended the March meeting, owns Hard Ball Cafe.

The zoning board isn’t the only board with jurisdiction over the project. On Tuesday, the Historical Preservation and Architectural Review Board (HPARB) asked for more information on the project, deeming the application incomplete. Drerup is the chair of the HPARB board, but recused herself from considering the project.

The planning board will also consider the project at its next meeting, which will be at 4:30 p.m. on April 21.

In March the board of trustees voted unanimously to be the lead agent on a type-one action under the State Environmental Quality Review Act (SEQR).

Cooperstown Mayor Jeff Katz said he is in favor of the project if it can satisfy the various boards.

“These are independent boards and they do a great job for us of being independent,” he said. “So I am always interested in letting the process play out.

“That being said, I do want to see economic development on Main Street,” he continued. “It bothers me when every bit of growth is on the Route 28 corridor, and the village doesn’t share in it even though the growth is because of the village.”

Katz said it was a mistake to get caught up in the details of the project’s look and height before the process is complete.

“Don’t believe anything is going to be final until it passes (the boards and trustees),” he said. “The applicants have shown their willingness to work with the village, within the laws, to get this project approved. So I have to think that if one of the boards asked for a change, they would be willing to work with them to try and make that change.

“I trust the boards on this,” Katz said. “We have good boards.”

The next trustees meeting is April 27 at 6:30 p.m. in the meeting room at 22 Main St. Katz said he was not sure if the trustees would be ready to vote on the project.