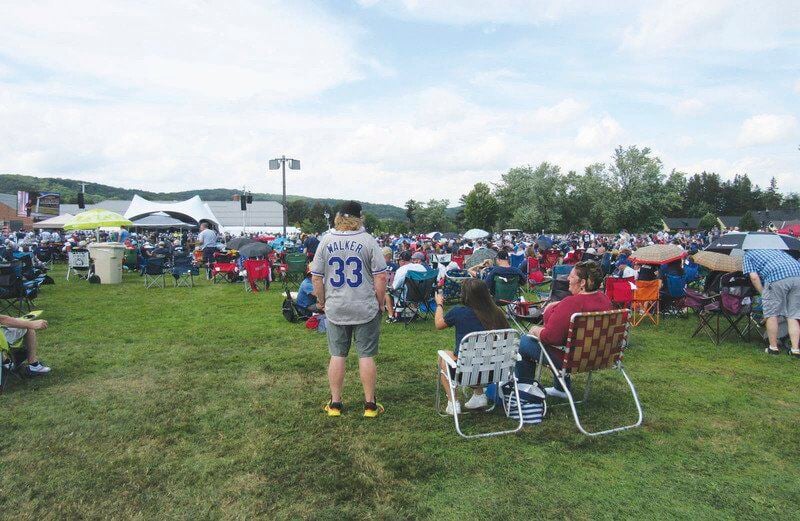 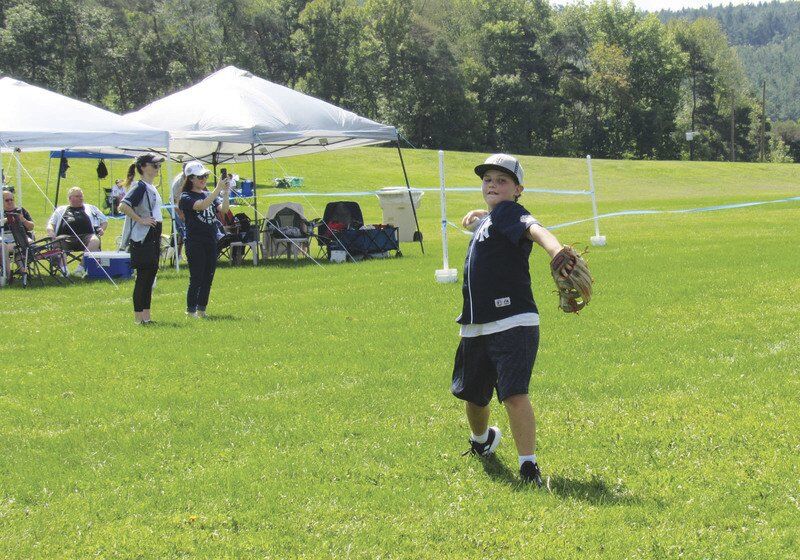 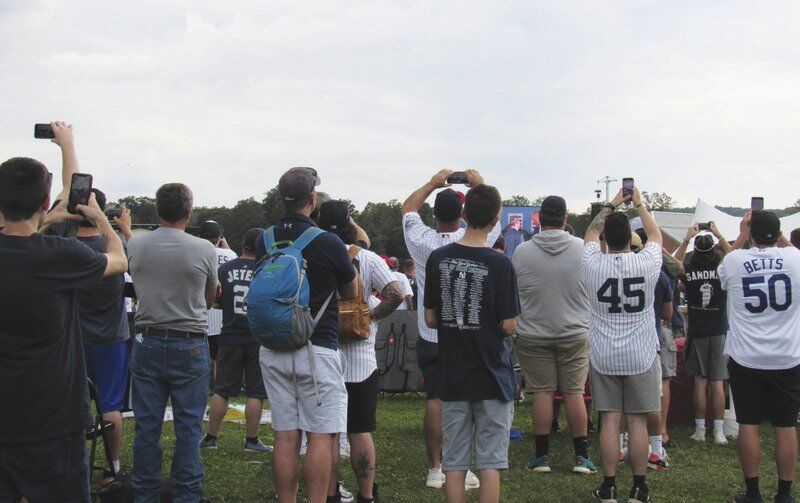 Vicky Klukkert | The Daily Star Fans raise their cellphones to record his introduction during the National Baseball Hall of Fame Induction Ceremony on Wednesday, Sept. 8. 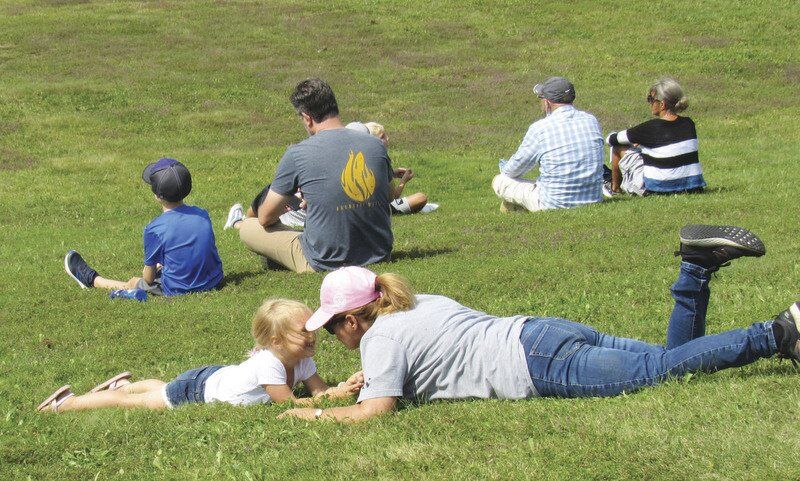 Vicky Klukkert | The Daily StarLilyana Pabis and Jennifer Mamy of Amsterdam roll down the hill at the Clark Sports Center while "Centerfield" is played prior to the National Baseball Hall of Fame Induction Ceremony on Wednesday, Sept. 8. 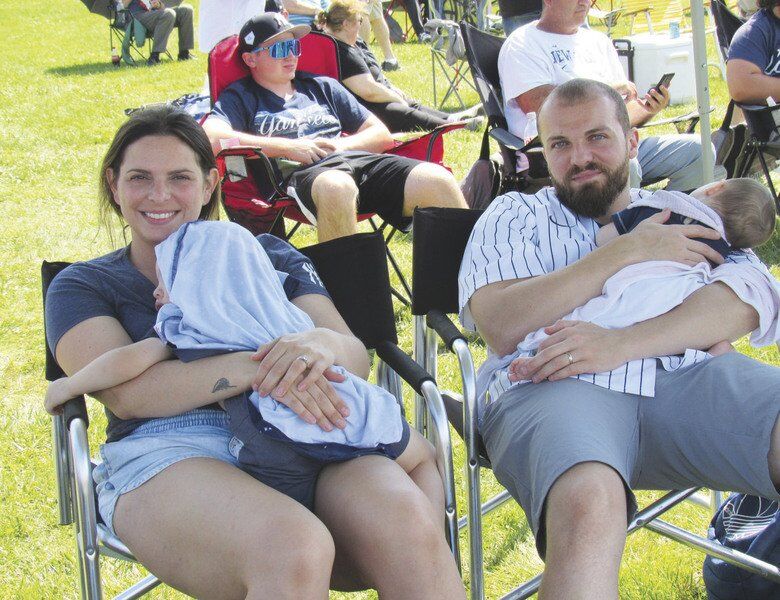 Vicky Klukkert | The Daily Star Fans raise their cellphones to record his introduction during the National Baseball Hall of Fame Induction Ceremony on Wednesday, Sept. 8.

Vicky Klukkert | The Daily StarLilyana Pabis and Jennifer Mamy of Amsterdam roll down the hill at the Clark Sports Center while "Centerfield" is played prior to the National Baseball Hall of Fame Induction Ceremony on Wednesday, Sept. 8.

Baseball fans from across the United States ventured to Cooperstown to see Derek Jeter, Larry Walker and Ted Simmons inducted into the National Baseball Hall of Fame on Wednesday, Sept. 8.

Most in the audience were there to see Jeter, and the crowd was a sea of navy blue and pinstriped jerseys with some St. Louis Cardinals and Colorado Rockies jerseys sprinkled in. Former players’ union director Marvin Miller, who died in 2012, was also inducted.

Orton said he was there with his brother. They flew into New York City and attended a baseball game Tuesday night before coming to Cooperstown for the induction ceremony.

“Growing up in the middle of Missouri, you either became a Cardinals fan or a Royals fan. I chose wisely,” Orton said.

Growing up in the 1960s, he said, he got to see many great players including Hall of Famers Bob Gibson and Orlando Cepeda, who was also at the ceremony.

He said he and his brother made their first trip to Cooperstown to honor Simmons, because “I could die tomorrow, might as well enjoy today,” adding that he wasn’t sure when the next Cardinal would be inducted.

Another brother duo taking a road trip to the induction ceremony was Nate and Steve Rydalch of Denver, Colorado. They, too, were headed to the Hall of Fame for a tour after the ceremony, Nate said.

The Rydalch brothers said they were there to see Walker inducted. Before their first visit to Cooperstown, the brothers watched the Hartford Yard Goats, the Double-A affiliate of the Rockies, and the Boston Red Sox play.

Steve said: “Fenway is nice for its history, but the Yard Goats’ stadium is much nicer than Fenway Park.”

Steve and Nate said they started watching Walker play when they were kids and he was with the Montreal Expos, and were happy to watch him play for the Colorado Rockies.

“He’s the greatest player that ever played. He was a five tool player that doesn’t get analyzed. He was so great. He was even better than that other player,” Nate said as he pointed to a Jeter jersey.

Others at the induction ceremony would disagree, including Jerry and Maureen Opanowski from Albany. They said they started watching Jeter play when he played for the Albany-Colonie Yankees.

“All of the core four played there,” Jerry said. “They all played their minor league careers there.” The core four were Jeter, Mariano Rivera, Andy Pettitte and Jorge Posada.

Of Jeter, Maureen said: “It was great watching him play. Just seeing him develop as a player and the great decisions he made. I wish I could turn back time and watch him play again.”

Jennifer Premo of Rome said she also wished she could watch him again. She created a sign that said “2 x 222 miles 2 see #2.”

“I created a sign that said I traveled 222 miles when I went to see his retirement game,” Premo added.

She was with her children and friend Julie Summa, whose son P.J. got to meet Jeter at Hamilton College when P.J. was 6.

“Rome (school) delayed a week, but we would have been here anyway,” Summa said of bringing her child to the ceremony on a Wednesday, while Premo nodded in agreement.

Jeter was Blake Shields’ and Samuel Huckans’ favorite player of all time, they said, and for the two youngsters from Amsterdam, it was a fun day to see their hero inducted into the HOF,  Both said they were in attendance two years ago when Rivera was inducted.