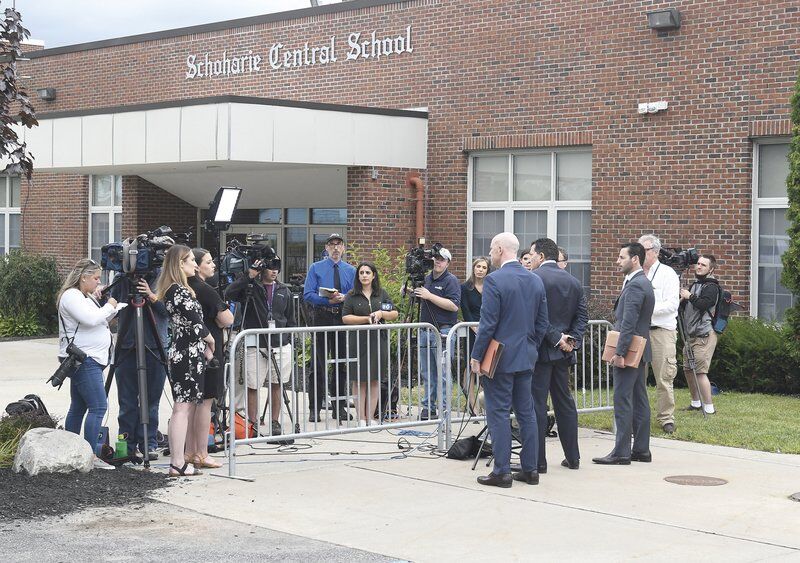 Associated Press Attorneys for Nauman Hussain, who was charged in a 2018 limousine crash in Schoharie that left 20 dead, talk to reporters Thursday in Schoharie. 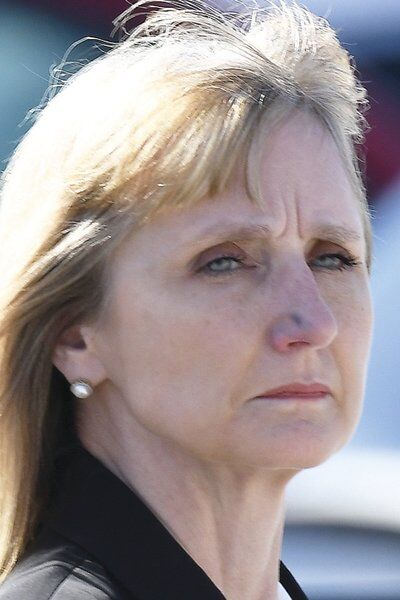 Associated Press Attorneys for Nauman Hussain, who was charged in a 2018 limousine crash in Schoharie that left 20 dead, talk to reporters Thursday in Schoharie.

SCHOHARIE — In a school building just a mile from one of the nation’s deadliest highway crashes, the manager of Prestige Limousine Company accepted a plea deal Thursday, Sept. 2, that puts him on probation for five years for a crime that claimed the lives of 20 people.

Nauman Hussain, 31, of Saratoga County could have faced up to four years in prison for allowing the limousine to fall into such disrepair that authorities called it a “death trap” by the time of the Oct. 6, 2018, crash.

In accepting the plea bargain, Hussain pleaded guilty to 20 counts of criminally negligent homicide. The arrangement sets the stage for him to get probation for 60 months, with a requirement that he complete 1,000 hours of community service.

The agreement also prohibits Hussain from employment in the commercial transportation industry.

Hussain, now 31, said “yes” 20 times when he was asked by County Judge George Bartlett III if he was responsible for the deaths of the victims, each of whom was named by the jurist.

Displeased with the outcome, one woman audibly complained, prompting court officers to whisk her out of the building. Hobbling on crutches, she yelled: “He killed 20 people! Don’t touch me!”

The hearing was moved to the gymnasium of Schoharie Central School to accommodate more than 60 relatives and friends of the victims of the Oct. 6, 2018, disaster.

The fatalities happened when a stretched, 31-foot 2006 Ford Excursion limousine had both its front and rear brakes fail as it came down a steep stretch of state Route 30 and careened across Route 30A into the parking lot of the Apple Barrel restaurant. There, it crashed into sport utility vehicle and fatally struck two pedestrians before smashing into an embankment.

Hussain, flanked by his lawyers, sat quietly before the judge as a parade of relatives of the victims gave emotional impact statements, some of them maintaining he was getting off easy for cutting short the lives of 17 young adults who had hired his limousine to go to Brewery Ommegang in nearby Otsego County that day. The relatives said the victims were trying to travel to their destination in a responsible way, having no idea the vehicle they had hired a would prove to be a “death trap.”

Bartlett said an investigation by Schoharie County District Attorney Susan Mallery as well as a scathing report by the National Transportation Safety Board into the causes of the accident revealed that the mechanical disrepair of the vehicle was at least partly the fault of a chain of repair shops, Mavis, and a state inspection system that did not pinpoint the condition of the brakes.

Hussain defense lawyer Joseph Tacopina told reporters later the terms of the plea bargain were appropriate, noting the maximum penalty that could be meted out to his client is 1 1/3 to four years in prison.

“There was obviously no criminal intent on Mr. Hussain’s part,” Tacopina said, adding: “We had a substantial defense, the first being Mavis (Discount Tire),” whose mechanic had worked on the ill-fated limousine in May 2018 at a shop in Saratoga County.

Hussain, Tacopina said, “went there and asked for the brakes to be serviced, for the brakes to be checked, paid for such services to be done, which he thought had been done but which were not done. The vehicle passed an inspection, not only by Mavis, which is licensed by New York state, but also by New York State Police a month before the accident. That’s why (the plea agreement accepted by the court) is the right outcome.”

Tacopina also revealed that Hussain stands willing to assist the victims’ families in pending civil lawsuits alleging there was negligence involved in the inspections that led to the limousine staying in service despite its mechanical defects.

“He will give them whatever justice he can give them, which I believe will help them,” the lawyer said. His client, he noted, “was crying throughout the whole proceeding.”

“He has really been shaken by this to the core,” he added.

Sheila McGarvey of Amsterdam, lost both her son and daughter-in-law, Shane and Erin McGowan, in the crash. She said she remains in anguish thinking about the final frantic moments of their lives, trapped in an out-of-control vehicle, hurtling down a highway ramp.

As for Hussain’s community service, McGarvey said: “He should work with a medical examiner in a morgue and witness the autopsies of 20 victims of car crashes.” She paused for a few minutes and silently prayed what she said was the Irish Penal Rosary in memory of the victims.

“Every day I try to wrap my head around this impossible situation,” McGarvey said.

Bartlett acknowledge during the proceeding that the relatives’ hopes for a more punitive sanction “was not an unreasonable opinion.”

Directing his comments to Hussain, the judge said: “Go forward with the rest of your life. You’re getting every benefit of the doubt from the district attorney.”

District Attorney Susan Mallery, completing her first term in elective office and asking voters to re-elect her for another four years, declined to discuss the plea bargain. She noted Hussain won’t be formally sentenced for another two years, as he must first complete an interim probation requirement.

A 2019 report by federal transportation safety investigators found that if New York had a stronger seat belt requirement for limousines, the lives of some of those who perished might have been spared. The report noted that most of the seat belts in the vehicle were under the bench seats and invisible to passengers.

Federal limousine safety rules have since been strengthened, with the Schoharie tragedy being the catalyst.

Investigators have also determined there was traces of THC, the active ingredient in marijuana, in the blood of the 53-year-old driver who was among the 20 people killed that day. The driver was an employee of Hussain.