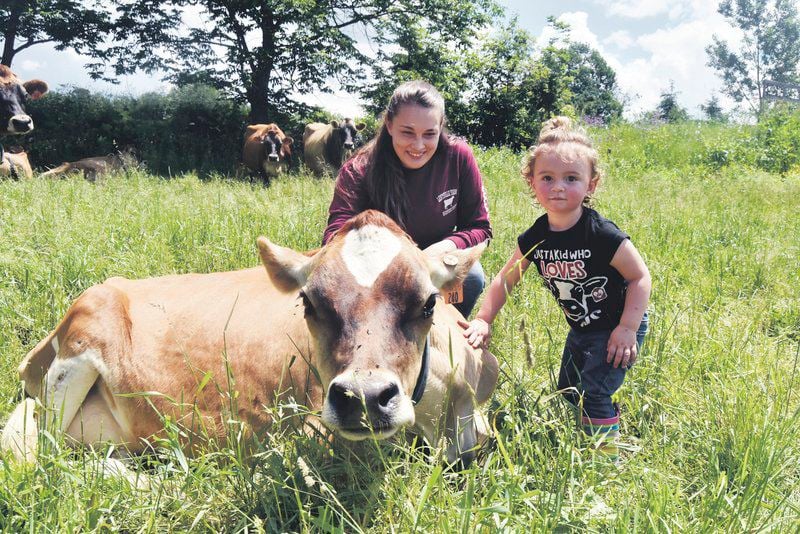 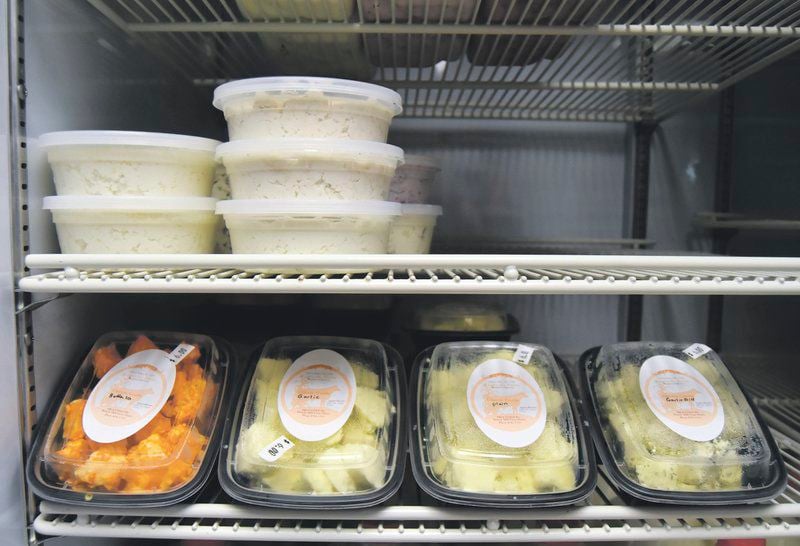 Sarah Eames | The Daily StarA variety of flavored cheese curds made by Lentsville Farms in Cherry Valley are displayed for sale in the cooler at Tom & Kelly’s Convenience Store in Springfield Center.

Sarah Eames | The Daily StarA variety of flavored cheese curds made by Lentsville Farms in Cherry Valley are displayed for sale in the cooler at Tom & Kelly’s Convenience Store in Springfield Center.

Faced with an uncertain market and plummeting milk prices amid the coronavirus pandemic, the Kraham family, owners of Lentsville Farm in Cherry Valley, started producing their own line of cheeses and other dairy products this year.

The Krahams own about 150 head of Jersey cows, 50 of which are milking, according to Keelan Kraham, who owns a 25% share in the limited liability company with his parents, Helene and Martin, and brother Kyle.

“Our entire family has lived within five miles of here since 1859,” he said.

Keelan and Kyle are the family’s fifth generation of farmers, and are raising the sixth — cousins Jessalyn, 2, and Shane, 1.

“This is something we’ve wanted to do since we were in high school,” Keelan said.

The brothers partnered with their longtime friend and former classmate, Barry Gaughan, who, together with his wife, Kaylynn, owns Windy Hill Goat Dairy in Cherry Valley.

The Gaughans process their own dairy products, including milk, drinkable yogurt, artisanal cheeses, soap and lotion, and sell them at local farmers’ markets and small retailers in the area.

“It’s a group effort,” said Mariah Kraham, who is married to Keelan. “We definitely wouldn’t be able to do it without them.”

Keelan said the family previously hoped to expand its milking herd, but plans changed when the coronavirus pandemic hit.

“Our biggest goal right now is to build a farm store,” he said.

As a member of the Agri-Mark cooperative, Keelean said Lentsville Farm was “fortunate” to not have to dump any of its milk.

In terms of developing a line of value-added products, he said “we thought now was a better time than ever.”

“We consider ourselves part-time cheesers,” said Mariah, who oversees the processing, packaging and marketing.

She said the business is “starting small,” with farmers markets and direct orders, and slowly moving into retail sales.

“We’ve been overwhelmed with the outcome we’ve had,” said Katy Kraham, who is married to Kyle. “Nobody local has this.”

The current line of products includes seven flavors of cheese curds, creamline milk — which is pasteurized but not homogenized, according to Mariah — and plain yogurt, with flavor varieties on the horizon.

The recipes are borrowed and adapted from the Gaughans’ goat dairy recipes, Keelan said, because “cow dairy is similar to goat dairy, but with a higher fat content and a slightly different composition.”

The family regularly consults with a microbiologist from Cornell University, who proposes tweaks and alternatives when a batch doesn’t come out quite right, Mariah said.

The market is ripe for farm-made products, Katy said. “Consumers right now really have an interest in knowing where their products come from.”

For the Deysenroth family, owners of ByeBrook Farm in Bloomville, business picked up as the coronavirus pandemic set in.

Gwen Deysenroth, a seventh-generation farmer, surmised that customers were more inclined to shop at farm stands in order to avoid busy supermarkets.

“We mostly sell locally, from here to Kingston and some in Cooperstown,” she said. “Business is mostly in Delhi and Stamford.”

While the Deysenroth family has farmed the same land in Bloomville since 1787, ByeBrook Farm only began producing its own own gouda cheese 12 years ago, she said. The farm also sells bottled raw milk on the premises, in accordance with state law.

“We have our youngest son, Dennis, and his wife, Samantha, on the farm, so we were looking for a better income,” Deysenroth said. “We realized we needed to either expand or diversify, and we’ve always liked the idea of making our own cheese.”

Before starting their own production, Deysenroth and her husband, Paul, took a self-guided tour of a dairy farm in Vermont, which had a “similar herd of cows,” she said.

Because gouda is typically lower in fat content than most other cheeses, Deysenroth said, the family milks Holsteins instead of Jerseys or other breeds.

“We feed them a lot of dry hay, and no corn silage,” she said. “It makes for a better gouda.”

The family developed a recipe with the help of a private consultant, Deysenroth said, and “have not had any batch failures yet.”

The cheese is aged from a minimum of 60 days to up to three years, “which makes quite a difference,” Deysenroth said. Some of the younger varieties are seasoned with cumin, caraway seeds and dill.

With the help of their two elder sons, Paul IV and Daniel, the Deysenroths grow other crops and manage a farm stand, where they sell local eggs, honey, maple products, baked goods from fellow Bloomville dairy farmer Barb Hanselman and drinkable goat yogurt from the Gaughans at Windy Hill.