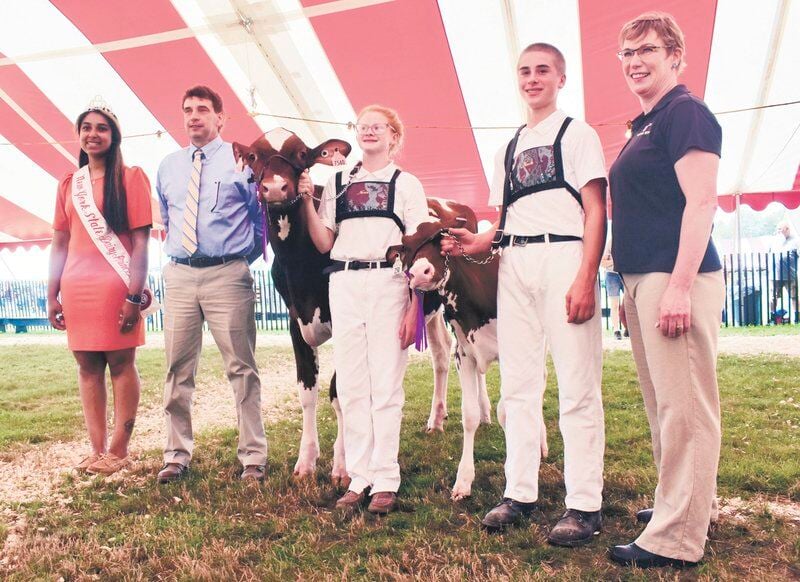 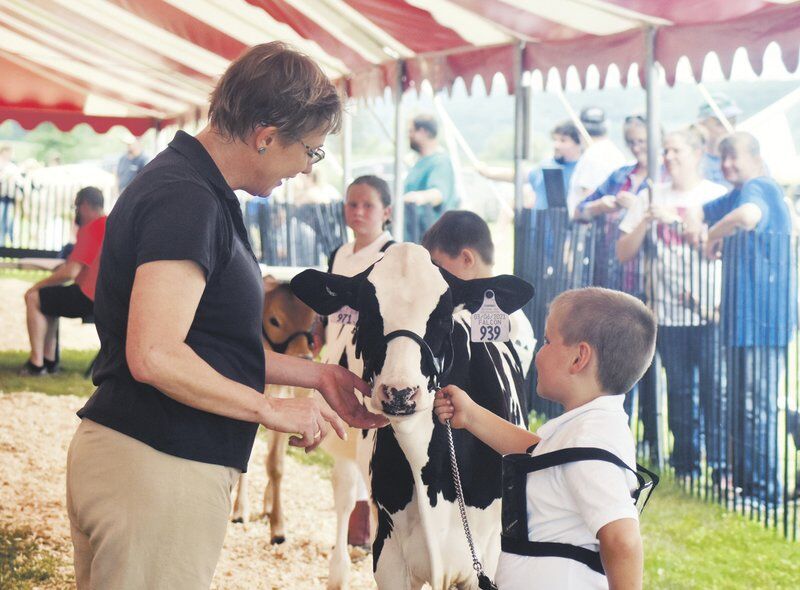 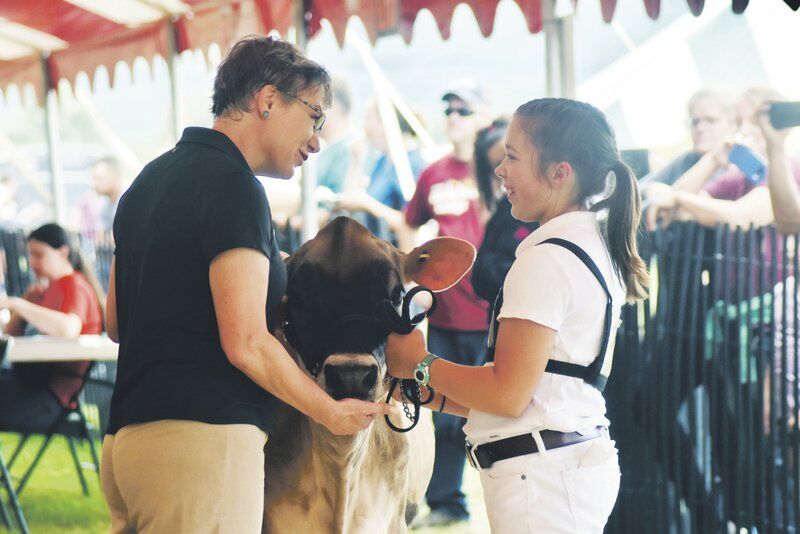 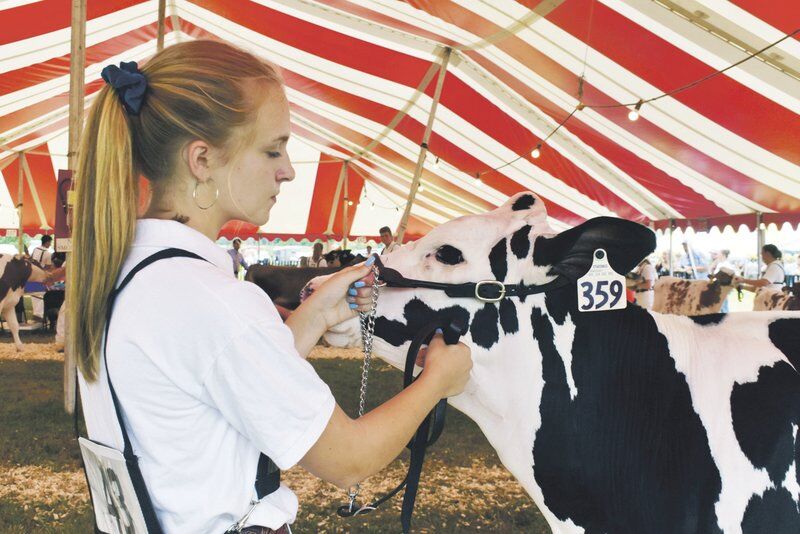 PHOENIX MILLS — It was a strong showing for the youngest dairy farmers of the region at The Farmers’ Museum’s 73rd annual Junior Livestock Show at the Iroquois Farm showgrounds Tuesday, July 13.

Otsego, Schoharie and Chenango counties each boasted first-place wins across multiple classes, and showmen from Delaware County snagged several second-place finishes on the third and final day of the competition, the largest show of its kind in New York, second only to the New York State Fair.

“I’ve been lucky enough to judge at Cooperstown several times and there’s always such high quality,” said Dr. Katharine Knowlton, a professor in Virginia Tech’s dairy science department who judged five of the 10 age groups. “The quality of the showmen that you all have here in central New York and in this area, I think, really speaks to the quality of the coaching and the quality of the families behind these kids. They’re awfully good.”

“This young man here with the small red calf is a runaway winner. He just never sets a foot wrong,” Knowlton said. “The calf is immaculate and beautifully trained, and she just always, always looks good. I love the calmness on the halter.”

“This is a girl that takes control right when she walks in the ring,” said Garritt Sammons, the second dairy judge and owner of Stonescree Farm in Johnstown. “The way she walks out, the head is up and under control all the while. Not a lot of criticism from me today with the exhibitor in first.”

“We feel like the showman that most closely follows is the one just younger with the red and white heifer,” Knowlton said, referring to Lilly and her calf. “Again, beautifully calm on the halter. She always has those legs up underneath her. That isn’t an easy heifer to show, but she does a good job.”

Competitors were judged on the control they exhibited over their animals, the ease at which the heifers could be walked around the show ring in a halter, the animal’s footing and posture at a halt and their own attentiveness to the judge. An animal’s cleanliness and appearance are also taken into consideration.

Showmen are quizzed on the birthdate and sire of their animals and asked other dairy-related general knowledge questions, and judges often give pointers and offer suggestions for improvement to the up-and-coming competitors.

Kaylee Byma and Ella Field, both of Otsego County, took first and second place in the 9-year-old class.

“Quite a slam-dunk winner for me in this age group; just well beyond her years,” Sammons said of Kaylee. “The appearance is neat, she stands up straight and strong and tall as she walks out. Not to be denied today, just a girl that did a tremendous job.”

“I appreciate the way the young lady in second keeps her head up — it’s that advantage,” he said of Ella. “It’s the halter placement that takes her over the young fellow placing here in third.”

Of Schoharie County’s Chandler Kniskern, who placed third, Sammons said, “I appreciate the way he keeps his feet set.”

Peyten Johns of Schoharie County and Cora Hodge of Chenango County were ranked at the top of the 10-year-old class. Gabriella Barnes of Delaware County placed third.

“These two in first and second really know what to do,” Knowlton said. “When they’re walking, they are presenting their heifer. The young lady in second — boy, when she’s on, she’s really good.”

“Two exhibitors sort themselves to the top in this class,” Sammons said. “An exceptional pair of 11-year-old showmen to start the class today. Both immaculately fitted, and they walk out with tremendous control and their heads up at all times.”

“The young man who wins the class, I think by the time he was about 10 feet in, he had the class won, as long as his heifer was clean, and she is,” Knowlton said of Schoharie County’s Sean Shults, who took first in the 12-year-old class. “Just very professional on the halter; she’s the best-trained heifer in the class. He’s able to get her set up a little more correctly, a little more quickly.”

“The young lady with that tiny jersey calf does a great job, and that’s not an easy calf to show,” Knowlton said of Hannah Tuttle of Delaware County, who placed second.

“Second goes over third today, just more natural with the halter. She keeps that elbow down, she stands straight herself as an exhibitor, gets away from the heifer a little bit — I prefer that over the individual in third,” Sammons said. “It just came down to personal preference for me in these top three for showman.”

The competition got tighter in the older classes of showmen. With only three showmen competing in the 17 and older class, Sammons asked each to switch halters and attempt to handle the animals belonging to their competitors.

“The young man in first moved to analyze her quickly and maybe make an adjustment — that gave him the advantage over the young ladies in second and third,” Sammons said. “A real outstanding class of showmanship. Just three kids, and I said, ‘If there’s 15 in the class, you folks probably would have ran up in the same spots.’”

“It’s been really different this year, but everybody’s been super happy to see each other again and be in the show ring,” she said.

“You want to see it all keep going, especially all these small family dairy farms around here,” she continued, observing that many of this year’s competitors are siblings, cousins and often descendants of previous generations of Junior Livestock showmen, and praising those new to the world of competition.

“A lot of those kids may not have their own farm, but they are working on farms or they’re learning from kids that live on farms,” Preston said. “That’s great, because they may not necessarily go on to be in agriculture, but to have that experience is priceless.”