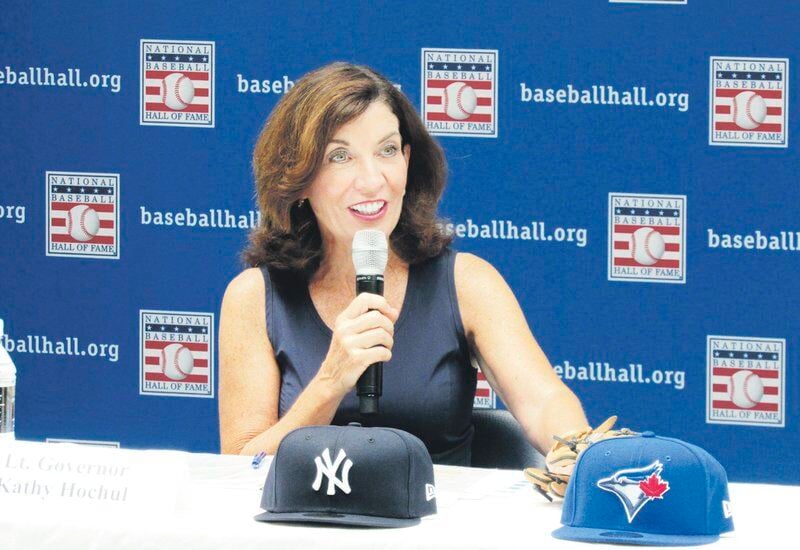 Greg Klein | The Daily StarLt. Gov. Kathy Hochul speaks Monday, Aug. 10, at the National Baseball Hall of Fame and Museum in Cooperstown during a panel discussion on New York tourism. 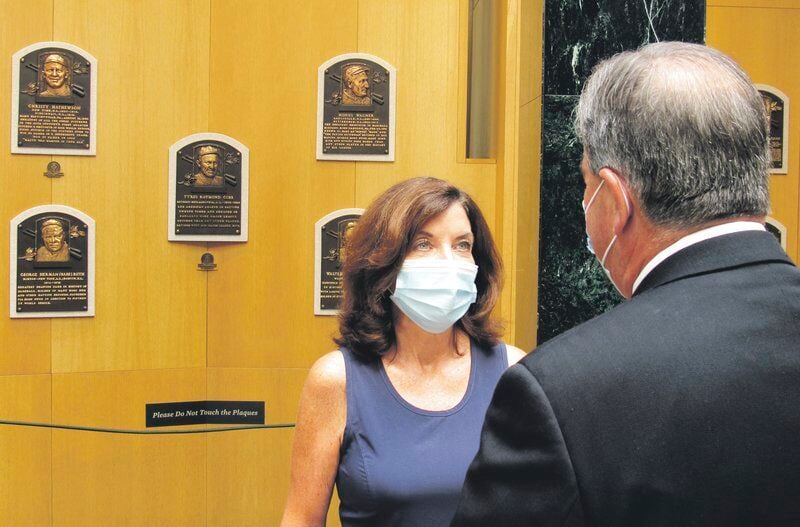 Greg Klein | The Daily StarLt. Gov. Kathy Hochul speaks Monday, Aug. 10, at the National Baseball Hall of Fame and Museum in Cooperstown during a panel discussion on New York tourism.

COOPERSTOWN — Lt. Gov. Kathy Hochul held a round-table discussion at the National Baseball Hall of Fame and Museum on Monday, Aug. 10, on tourism in New York.

The Democrat from Buffalo, who is in her second term, met with industry leaders and Cooperstown Mayor Ellen Tillapaugh, to discuss how local tourism has been affected by the coronavirus pandemic and how the state can help promote the industry.

She said the immediate future of tourism is in-state travel. She joked that she is telling everyone Niagara Falls is empty and now is the time for locals to visit. She said she has told New York City residents the same thing about the Hall of Fame.

"Anything we can do through our social media streams, and other avenues that we have through New York State I Love New York, we need to do that and we will continue to do that," Hochul said.

"It is not like it is a heavy lift," she said. "It is so breathtakingly beautiful to come to this part of our state. Everyone knows that, but it is like we take it for granted. It is charming. It's got the natural wonders and the outdoor experiences as well as world renowned institutions like this."

The event was the second Hochul held Monday; she arrived in Cooperstown directly from a similar round table in Saratoga Springs.

After the Cooperstown event, she said she had learned a lot about tourism in Otsego County and what local organizations had been through during the pandemic.

The panel gave Hochul a lot of information, including: The Hall and other museums were closed for more than 100 days; the Glimmerglass Festival canceled 35 performances; and the Hall is averaging about 13% of its normal summer attendance since reopening.

Fenimore is at a similar level, D'Ambrosio said, but The Farmers' — with most of its historic buildings closed, but reimagined as an historic park — is at 50% attendance and relatively thriving.

Neil said Ommegang has shifted from selling more kegs to focusing on bottles and cans.

Mondore told Hochul the Otsego Chamber has been working on issues dealing with childcare, an issue Hochul said meant a lot to her.

Harrington and Hochul talked about a "visit local" campaign, with Hochul again enthusiastically telling the group she has been touting this summer as being the time for New Yorkers to rediscover upstate vacation spots.

Hochul said the state is continuing to monitor the talks about a new coronavirus stimulus package and is waiting to issue state aid cuts until the federal package is decided.

She also praised New York's response to the pandemic, pointing out that the state has gone from the epicenter of the pandemic in America to one of the states with the lowest rates of infection.

"That is because our residents did what they were supposed to do," she said.

Hochul said her house is blocks away from Sahlen Field in Buffalo, where the Toronto Blue Jays will play their home games this season. She jokingly thanked the Hall for putting a cap from the "Buffalo Blue Jays" on the table in front of her and said she was looking for pitching tips in case she is asked to throw out a first pitch.