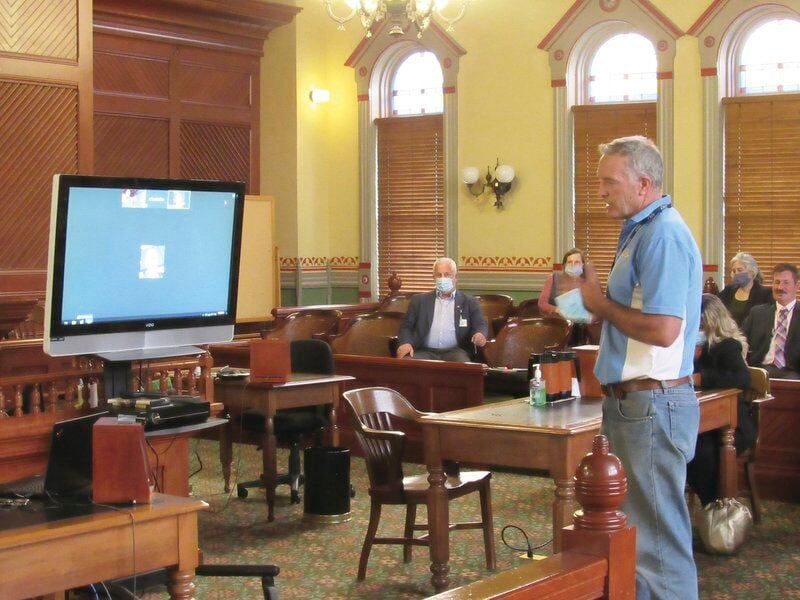 Greg Klein | The Daily StarOtsego County Board of Representatives Chair Dave Bliss speaks into the camera at a public hearing Thursday, Sept 24, at the Otsego County Courthouse in Cooperstown. 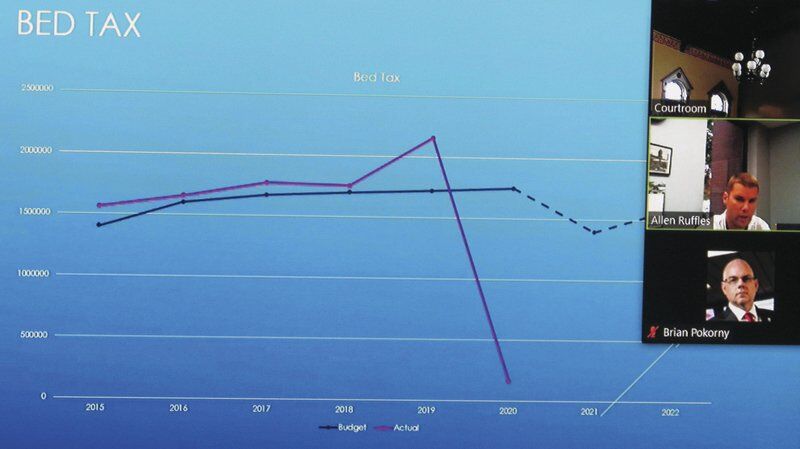 Greg Klein | The Daily StarOtsego County Treasurer Allen Ruffles drew a gasp from the Board of Representatives members when he showed them a graph of the bed tax revenue, which took a sharp dive in 2020.

Greg Klein | The Daily StarOtsego County Board of Representatives Chair Dave Bliss speaks into the camera at a public hearing Thursday, Sept 24, at the Otsego County Courthouse in Cooperstown.

Greg Klein | The Daily StarOtsego County Treasurer Allen Ruffles drew a gasp from the Board of Representatives members when he showed them a graph of the bed tax revenue, which took a sharp dive in 2020.

COOPERSTOWN — No members of the public showed up at the Otsego County Courthouse at 197 Main St. Sept. 25 to speak at a public hearing about exceeding the property tax levy.

Half of the county representatives attended the meeting in person, with several other watching along with members of the public on the county’s Facebook Live page. The members in attendance expressed surprise no one showed up to protest a possible raise of the tax levy, which is not guaranteed and won’t be decided until the board’s regular October meeting, at the earliest.

Otsego County treasurer Allen Ruffles prepared a presentation illustrating the county’s budget woes, which have been caused by the coronavirus pandemic, and exasperated by state aid cuts and a lack of federal help.

One of his slides, a graph showing bed tax revenue over the years, drew a gasp from the reps in attendance, as it showed an unmistakable sharp drop in 2020.

Ruffles said the updated projections on lost revenue shows Otsego County losing $9.45 million in revenues from its 2020 projections and a potential $6.4 million in 2021.

Although the tax levy cap is often referred to as a 2% cap, the legislators all agree the formula is more complicated than that, and some municipalities go over at lower percentages.

Many municipalities vote annually to allow an override just as a precaution because penalties for accidentally going over the cap are punitive, Bliss said. Ruffles said the county’s portion of the property tax is a small portion of the taxes residents pay and the only one that has grown by less than double digits over the past 15 years.

Board chair Dave Bliss, R-Cherry Valley, Middlefield, Roseboom, said if the county did exceed the cap this year, it would still have one of the lowest property tax rates in the state.

The Board of Representatives will have their next budget meeting at 1 p.m. Thursday, Oct. 1.

Bliss said the county’s police review board will also likely have its first meeting next week, at a day and time to be named later.

He named the 12-member review board, which includes six county representatives and six members of the public, including multiple people of color.

The members of the public are: SUNY Oneonta men’s basketball coach Cameron Conover and player Daniel Derice; Ameen Aswad, a case worker with Catholic Charities and Cooperstown resident; Ari Tobi-Aiyemo, a criminal justice professor at SUNY Oneonta and a representative from the Oneonta Area NAACP; Molly Myers,a Cooperstown graduate who works with the museums; and Oneonta native Bryce Wooden, who is also on the city’s review board.

With Gov. Andrew Cuomo ordering civilian and municipal review of policing policy and application in light of the deaths of George Floyd earlier this year, the panels have been charged with producing reports by next spring.

Bliss said he was pleased with the racial balance of the county’s panel and the expertise of the panelists, from the county and the community.

Bliss said the meeting will likely take place at the Meadows office complex at 140 county Route 33W in the town of Middlefield. It will also be broadcast on Facebook Live.

The next Board of Representatives regular meeting will take place at 10 a.m. Wednesday, Oct. 7 via Zoom and broadcast on Facebook Live.

Under the executive orders, public gatherings are limited to less than 50 people. Counting board members, county officials and a member of the media, less than 15 people showed up Thursday. Several of the reps said it was the first time they had seen each other in person since March.