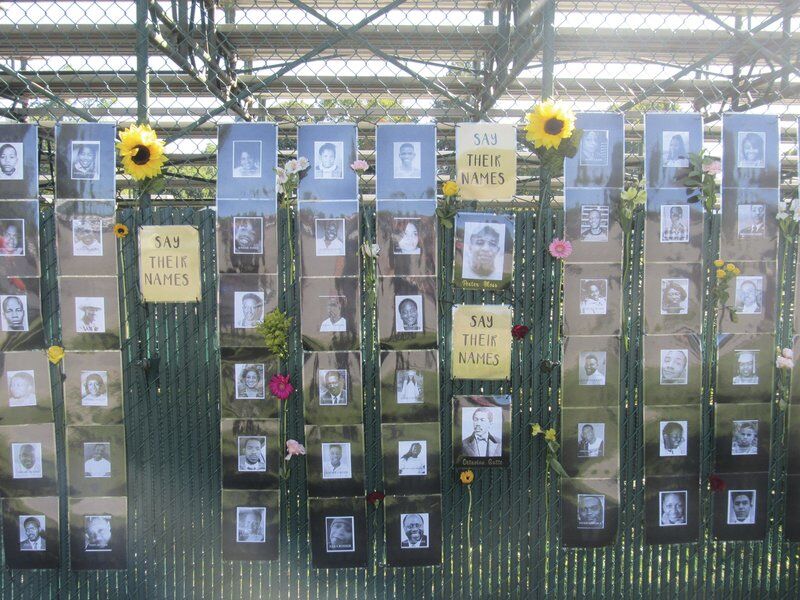 Greg Klein | The Daily StarThe Say Their Names Memorial made its Cooperstown debut Saturday, Sept. 19, with an installation at Doubleday Field on Bud Fowler Way. 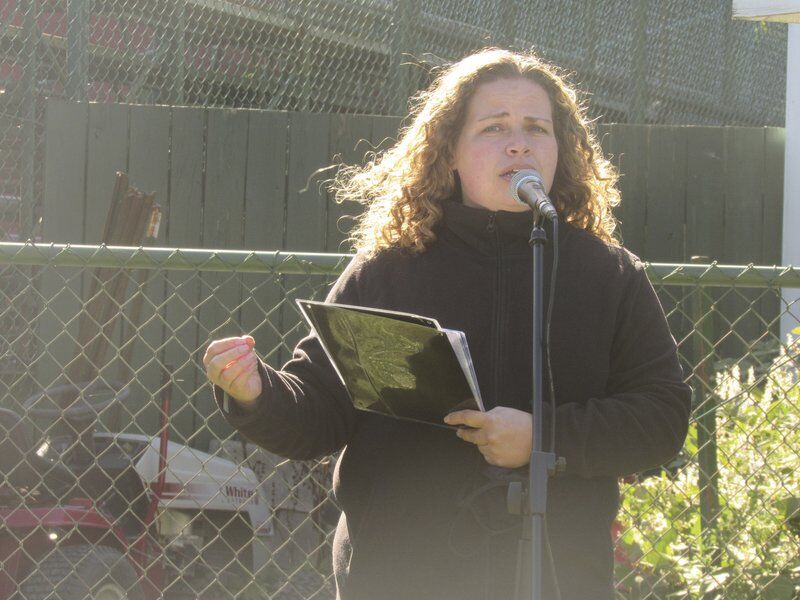 Greg Klein | The Daily StarOrganizer Jennifer Dibble speaks Saturday, Sept. 19, at the dedication for the Say Their Names Memorial in Cooperstown. 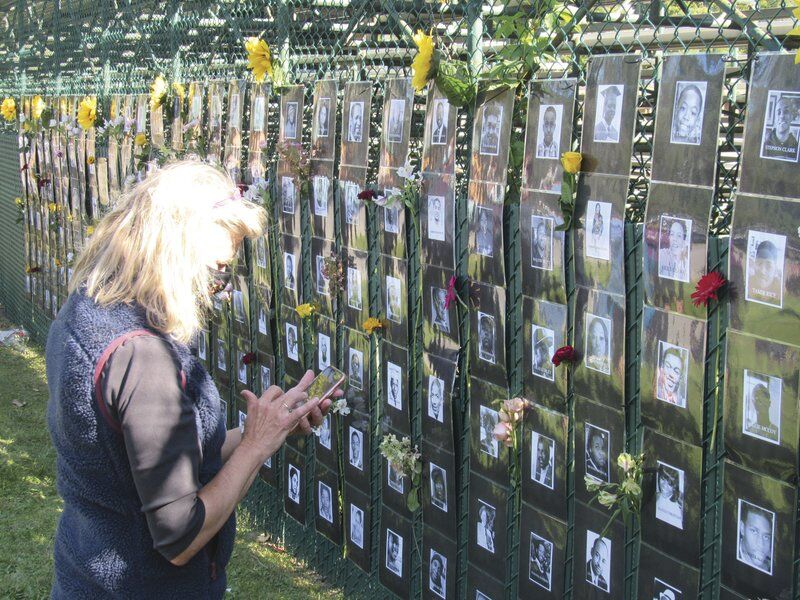 Greg Klein | The Daily StarCooperstown Mayor Ellen Tillapaugh uses her cell phone to look up the name of a person on the Say Their Name Memorials at Doubleday Field on Saturday, Sept. 19.

Greg Klein | The Daily StarThe Say Their Names Memorial made its Cooperstown debut Saturday, Sept. 19, with an installation at Doubleday Field on Bud Fowler Way.

Greg Klein | The Daily StarOrganizer Jennifer Dibble speaks Saturday, Sept. 19, at the dedication for the Say Their Names Memorial in Cooperstown.

Greg Klein | The Daily StarCooperstown Mayor Ellen Tillapaugh uses her cell phone to look up the name of a person on the Say Their Name Memorials at Doubleday Field on Saturday, Sept. 19.

COOPERSTOWN — About 40 people attended the dedication for the Say Their Names Memorial-Cooperstown on Saturday, Sept. 19.

The memorial features the names and pictures of 217 Black people who died violent deaths because of their skin color. They include several children, police officers and military members. It hangs on a section of fence on the side of the village's baseball stadium, Doubleday Field, adjacent to Bud Fowler Way — Fowler was a Cooperstown resident who was one of the first Black professional baseball players.

"You will see children, you will see elderly people on this memorial," organizer Jennifer Dibble said. "You will see military members. You will see police officers. (It is) really running the gamut."

The memorial began in Portland, Oregon, Dibble said, and was intended by its creator, Joy Proctor, to be a living document. It has mostly been on display in big cities, she said, and Cooperstown is the smallest place it has been displayed. Therefore Dibble — who until recently worked at The National Baseball Hall of Fame and Museum — researched local history as well as baseball history to see if she could find people for the Cooperstown version.

Moss, a pitcher with the Cincinnati Tigers and the Memphis Red Sox and a three-time All-Star, died at age 34 after being shot on a train while returning home from a game. "Doctor after doctor refused to help him because of his skin color," Dibble said.

Catto was also a pioneer in baseball, helping to found the National Colored Baseball League, according to his biography by SABR, the Society for Baseball Research. He helped integrate the U.S. military and served as a major in the Civil War. He also helped integrate the streetcar system in Philadelphia and advocated for the rights of Black men to vote. In 1871, at age 32, he was shot and killed after voting.

According to SABR, "Frank Kelly was the known assassin, but with police assistance he escaped and wasn’t arrested for another seven years, when he was extradited from Chicago. In 1877, despite many eyewitnesses, Kelly was acquitted by an all-white jury."

Dibble said she learned about the memorial after seeing a similar exhibit in Oneonta. She said the Oneonta organizers "had to jump through hoop after hoop after hoop," to get their display approved and she thanked Cooperstown's elected officials for making it much easier for her to bring the display to the village.

Some of the names on the memorial are of famous people, such as Martin Luther King Jr. and Malcolm X. Others are are people whose deaths have been been in the headlines this year, such as Breonna Taylor and George Floyd. However, Dibble said she had never heard of the majority of the people in the memorial and she encouraged the members of the crowd to do their own research about those people.

The Rev. LaDana Clark also spoke at the event and she asked the crowd to be allies to the Black community.

"Keep saying their names with videos and protests when injustice is known or caught on tape," she said. "Speak up when people you know are saying things that are racist or unjust.

"When the lives of Black people really matter, all lives will matter and have more value and more respect," she said. "Leadership in this country will mean so much more to everybody. Why? Because Jesus said, 'what you do to the least of these, you have done it unto me.'"

"'Fight for the things that you care about, but do it in a way that will lead others to join you,'" said Dibble, quoting Ginsburg.

Dibble said some people have asked her why she did a memorial for Black lives, instead of a memorial for missing children or police officers who have died in service.

"If you want that, have at it, and I will help you," she said, but she asked that people stop denigrating Black lives and deaths while honoring other lives lost in tragic circumstances.

The memorial will be on display until Dec. 1, or until the weather makes it impossible to keep it up. Visitors are encouraged to bring flowers, tributes to other people who have died and to leave sunflower seeds, which Dibble said she will plant and grow next year as a way of keeping the memorial alive.