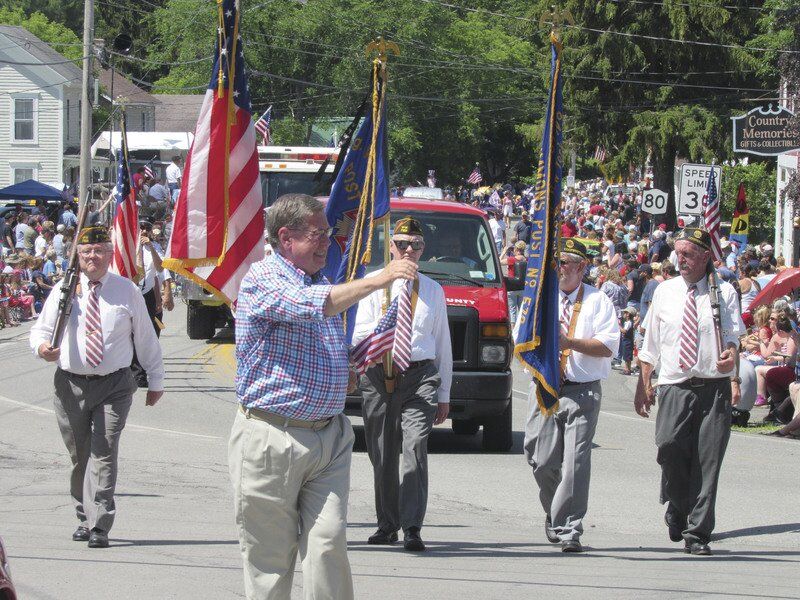 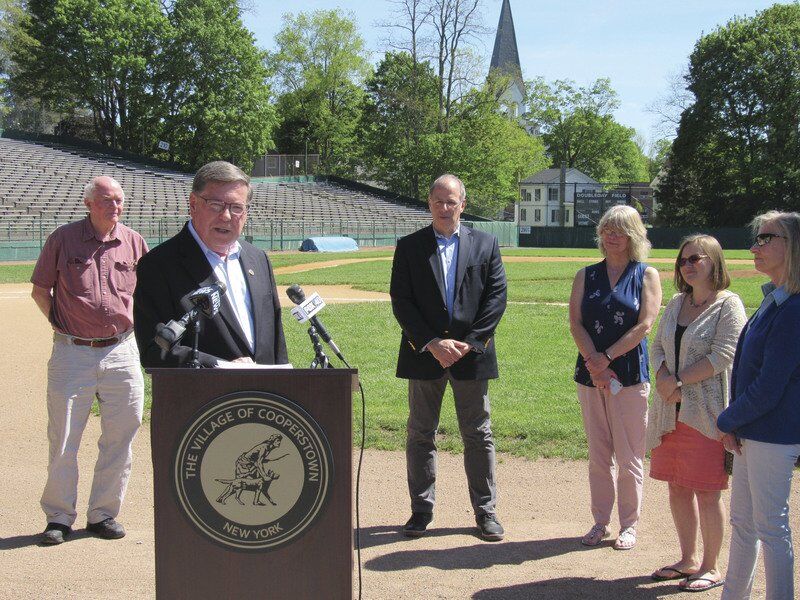 Greg Klein | The Daily StarState Sen. James Seward, who retired Jan. 1, speaks at a May 2018 announcement at Doubleday Field in Cooperstown as village officials look on. Seward announced a $1 million state grant from a Senate infrastructure fund to help with the field’s renovations.

Greg Klein | The Daily StarState Sen. James Seward, who retired Jan. 1, speaks at a May 2018 announcement at Doubleday Field in Cooperstown as village officials look on. Seward announced a $1 million state grant from a Senate infrastructure fund to help with the field’s renovations.

The last time James Seward’s hometown of Oneonta was represented in the New York State Senate by someone other than him, Ronald Reagan was president.

So, Friday, Jan. 1, marked the end of an era. Peter Oberacker Jr. was sworn in to replace Seward, who had his own first Albany swearing-in 34 years earlier and retired after serving 17 terms as a state senator — in District 50 for the first 15 years and in District 51 since 2003.

Seward, 69, spoke to The Daily Star on Monday, Dec. 28, reflecting on his 34 years in Albany and a 2020 where he fought off COVID-19 and a second bout with bladder cancer. He said he is finished with his second round of chemotherapy and his doctors are monitoring his numbers, but he is optimistic and feels great.

“I am very blessed, definitely, to have lived through two potentially fatal diseases,” he said. “I feel good.

“I am looking forward to — I won’t say it is a retirement, because I intend to keep active — but I’m excited about the next chapter of my life,” he said. “Hey, I am retiring from the Senate. I am not retiring from my dedication to the area. In the new year, I will be looking for some ways to still be a service to the area.”

An Oneonta native, a Hartwick College graduate and a longtime Milford resident, Seward said he and his wife, Cindy, are not going to stray far from their roots. Their daughter and granddaughters live in Oneonta and they intend to be a nearby part of their lives for years, he said.

His term has an odd symmetry, Seward said. “Mario Cuomo was the governor when I started and Andrew Cuomo, of course, is the governor now,” he said. “In 34 years, I have only had an executive from the same party as me for 12 years, when George Pataki was governor.”

Being a Republican in central New York may ensure a strong base to get elected — Seward had no competitive elections during the back half of his career — but it has never meant a complete majority of state government in his 34 years.

Until recently, Seward had been in the majority in the Senate, but Democrats took control of it in 2018 and now have a veto-proof majority.

As Seward’s term wound down, his longtime partner in the Assembly, former Assemblyman Bill Magee, D-Nelson, passed away this year on Christmas Eve. Magee served 28 years in the Assembly and his 121st district overlapped with Seward’s in Otsego County.

“Bill was very humble, a very low key guy,” he said. “He was a son of a dairy farmer. We had a lot in common, and, especially, we both wanted to serve our districts. We did a lot together.”

Dealing with the other party has come naturally for Seward, who received retirement praise and thanks from all the top Democratic politicians in his region, including Oneonta Mayor Gary Herzig and Cooperstown Mayor Ellen Tillapaugh.

Oneonta gave him the key to the city last month. Cooperstown’s Board of Trustees held a special presentation Monday, Dec. 28, and named him a “Native Son,” thanking him for the millions of dollars he brought to Doubleday Field and the village’s wastewater plant upgrade.

“I never cared if the mayor or the town supervisor is from the other party,” he continued. “That never made a difference to me when it was time to help people in my district.”

Seward gave the younger Gov. Cuomo a compliment, saying his budget process has been relatively stable, at least before 2020’s coronavirus pandemic.

Aided by court rulings that give more power to New York’s executive branch in budget matters, Seward said: “Andrew Cuomo, he has done a much better job than some governors of getting a budget out there. I remember on at least two occasions being (in Albany) to pass a budget in August when it was due April 1.”

Seward said he regrets the way national politics has made state politics harder and made friendships across the aisle rarer. He said an upstate politician has to build relationships with New York City and Long Island politicians, regardless of political party, to be a good advocate for the region.

“Call me old-fashioned, but I will always work with anyone who wants to work with me to the benefit of my district and the people of the state of New York,” he said.

Seward said he also regrets that he leaves office with New York seemingly on the verge of losing representation in Congress, based on population declines. And more specifically, he said he regrets the “hollowing out” of upstate communities as their younger populations migrate to areas with more jobs and better economies.

“That has hit the upstate region particularly hard,” he said.

• Chairing the Senate Energy Committee and spearheading the passage of the 1997 Power for Jobs bill that lowered energy costs for job providers.

• And, finally, he said, “I get the greatest satisfaction from helping individuals. When somebody is at the point they are calling a Senator’s office, usually they are upset. They are at their wit’s end. It is profoundly gratifying to be able to help people when they are in that kind of situation.

“I have always drawn satisfaction from being able to help individual people,” he said.