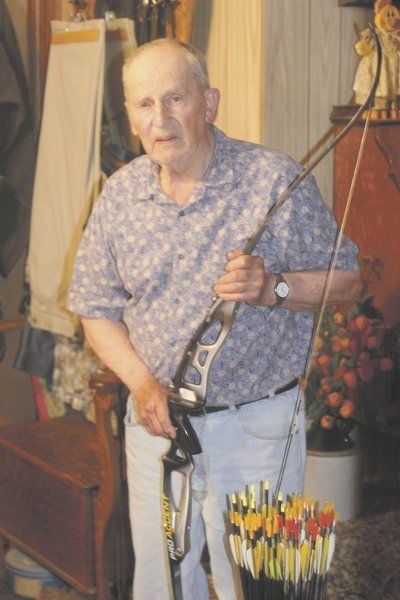 Archer Andrew Lakata holds one of the bows he competes with in senior games. 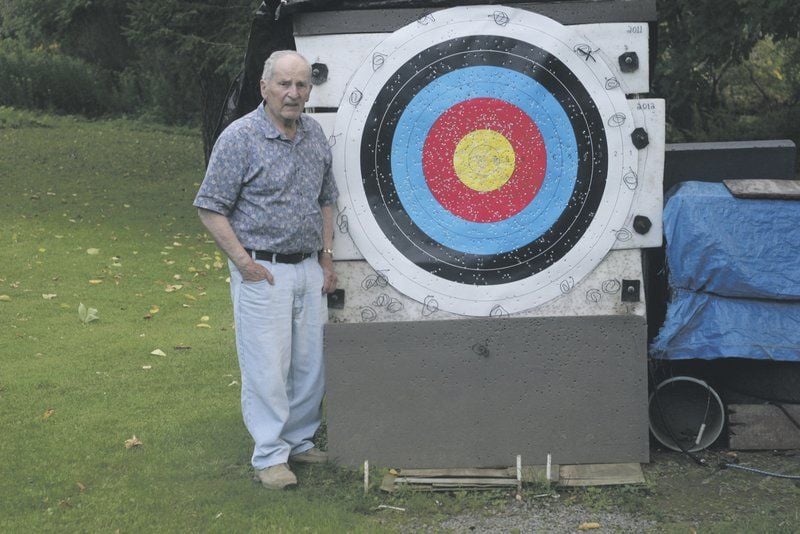 Bera Dunau | The Cooperstown Crierandrew Lakata, 83, stands next to one of the targets he uses to practice his archery.

Archer Andrew Lakata holds one of the bows he competes with in senior games.

Bera Dunau | The Cooperstown Crierandrew Lakata, 83, stands next to one of the targets he uses to practice his archery.

Andrew Lakata, of Richfield Springs, may be Otsego County’s most consistently successful athlete. Over the past 10 years he has won state, national and world titles in archery, maintaining his success with a daily training regime and a passion for competition.

“I’ve always been involved in sports,” said Lakata. “I still have that drive.”

“It was a nice shoot, a nice (trip). I had my lobster,” said Lakata, of his trip to Maine.

He made the journey by car, and drove himself.

Lakata grew up in Nesquehoning, Pa., where he attended high school, lettered in football and was captain of the gymnastics team. After serving in the Navy, he attended college at the State Teachers College at East Stroudsburg, now East Stroudsburg University, in East Stroudsburg, Pa. While attending school he lettered in gymnastics for four years and competed in weightlifting. He continued to compete in weightlifting after graduation, and said that he earned qualifying totals that would have allowed him to try out for the U.S. Olympic teams in 1954 and 1958. However, he chose not to compete.

“I couldn’t compete against the world,” said Lakata.

After giving up competitive weightlifting in his 30s, Lakata said that he wanted to choose a lifetime sport, and decided on archery.

“That’s basically why I’m doing it and can still do it,” he said.

Lakata said that he took a break from competitive sports to get his master's degree and raise a family. He and his wife, Kathy, moved to Richfield Springs in 1962, and he taught high school in Richfield Springs for 31 years. Kathy Lakata died last year; they were married for 55 years.

He also has four living children and two of his children have passed away. He has seven grandchildren.

Lakata said that he began competing in senior games competitions 10 to 12 years ago. Since then he has had success as an archer, winning his age category in the last four National Senior Games. The National Senior Games are held every two years. Additionally, he has competed twice at the Huntsman World Senior Games, which are held yearly in Utah, where he placed first and second respectively.

Lakata also competes in other archery formats including indoor archery and field archery, which involves shooting at targets in the woods.

In 2011 Lakata was inducted into the New York State Field Archers and Bow Hunters Hall of Fame.

Lakata is also a hunter, and he estimates that he has killed 20 deer with a recurve bow. Last year he took down two deer, although he used a shotgun.

In a number of competitions, Lakata is the only person competing in his age category. This was the case in Maine. In Alaska a competitor quit in the middle of the competition.

Still, Lakata tries to improve upon his performance, and he can still outshoot people in the lower age categories.

“I score a lot of times better than they will,” said Lakata. “But not all the times.”

“I practice every day,” he said.

In fair weather, Lakata practices using outdoor targets, while in inclement weather, and in the winter, Lakata shoots at targets in his basement.  Inside he has to shoot sitting down because of the height of his ceilings.

Lakata also makes his own arrows and bowstrings.

Lakata said he hopes “to keep on going in the archery as long as I possibly can.” He noted that people have competed into their 90s in the sport, but acknowledged that, “old age is starting to creep in.”

His vision continues to be strong. Lakata does not wear glasses, although he said he uses “drugstore cheaters” when reading.

Lakata is qualified for the 2015 National Senior Games and intends to compete.