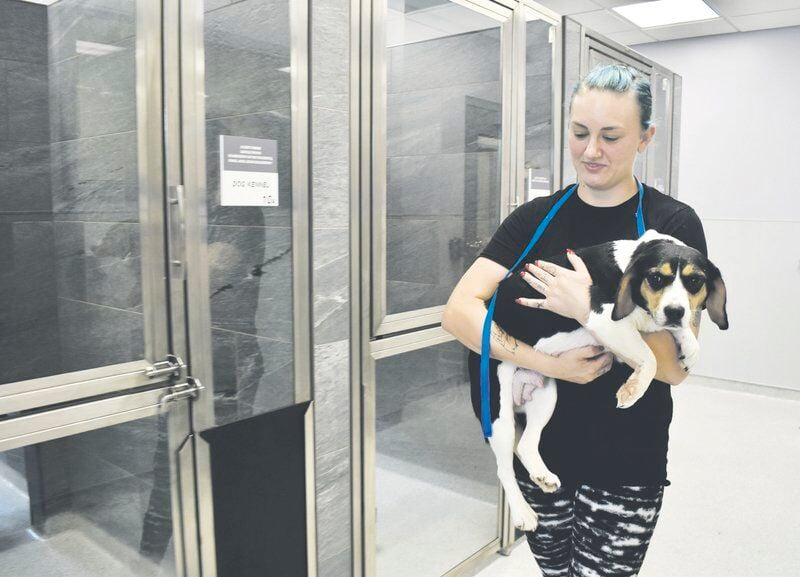 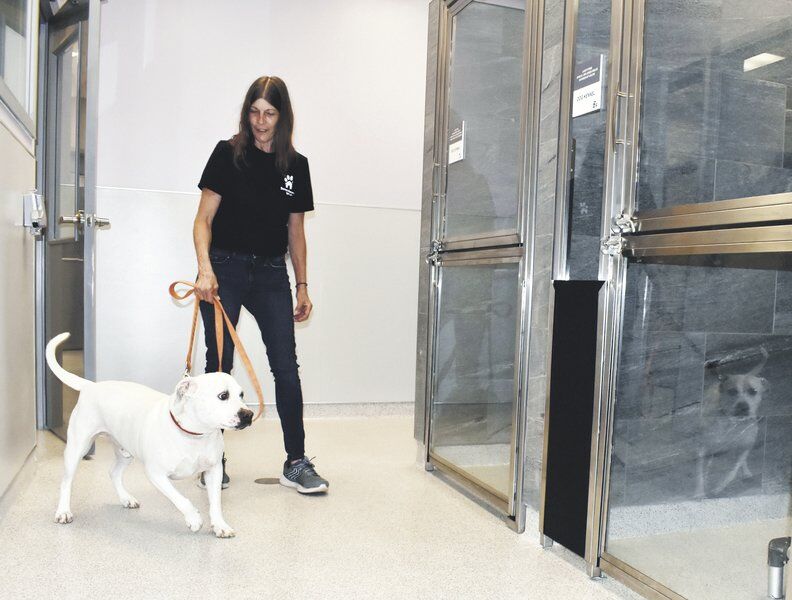 INDEX — Thirty-six dogs and 15 cats moved into their new home Thursday, July 15, at the Susquehanna SPCA’s new headquarters, just a mile north of the former building in Hyde Park.

“We’re getting down to the final pieces and it’s all coming together,” Haynes said Thursday before the official opening. “This is a dream come true.”

The 11,000-square-foot shelter was constructed in just under two years, according to Haynes. The $6.2 million facility was funded by several thousand dollars from more than 125 donors, and the sale of the previous property to the Finger Lakes-based Montezuma Winery.

Anita’s Adoption Center, named for Staffworks founder and president Anita A. Vitullo, features 20 adoption floor kennels, two community cat rooms with outdoor “catio” extensions, a glass-walled “feature room” with high visibility from the main entrance and lobby, and a state-of-the-art surgical suite, all separated by “corridors of care” and “hallways of hope.”

The layout is designed to make animal care more comfortable and efficient for the shelter’s staff, volunteers and furry residents, Haynes said. Cleaning, maintenance and food prep rooms are adjacent to the cattery and kennel rooms, allowing for easy pass-through of food, water, medicine and waste.

“The research tells us the less animals for people to choose from, the better chance they have to be adopted,” Haynes said. “The building was purposely designed to be more efficient so animals can get to the adoption floor faster. We may not house the same amount of animals at one time but over time, we know we will serve more animals.”

The space includes private adoption counseling rooms, another vital step toward improving the adoption process, according to Haynes.

“We don’t do paper applications,” she said. “We like to bring people in and talk with them face-to-face to help them find their next best friend.”

The heating, ventilation and air cooling system isolates airflow to each individual room and kennel in the shelter, Haynes said, which is designed to contain the scents of each animal to its own space.

“The smell of another animal can be a very aggravating, very stressful factor in a shelter environment,” Haynes said. “We’re trying to make this as comfortable as possible for the animals.”

Visitors and prospective adopters are invited to socialize with shelter dogs in a grassy enclosure in front of the building called Seaver’s Park, named in honor of Otsego County resident Martha Yager’s “beloved golden retriever.”

“When people come in to adopt a dog, a lot of them think the best way to get to know the dog is to take them for a walk,” Haynes said. “But we’re finding that they’re still over-excited and sometimes stressed when they’re out on a leash. The best way to meet a shelter dog is when they’re relaxed, so this is a place where that can happen.”

The community room features a conference and storage space that will be available for public use, Haynes said. “The community built this shelter, and we want the community to feel welcome to use it.”

The community room and the shelter’s endowment fund are dedicated in honor of Louis Busch Hager, the late president emeritus of the Susquehanna SPCA’s board of directors who oversaw the purchase and construction of the former site, which was dedicated 34 years to the day before the new location, Haynes said.

The new shelter’s animal intake room has its own separate entrance, isolated from the traffic and noise of the rest of the building in order to facilitate a “calm and understanding environment,” Haynes said.

“When somebody is here to surrender their pet, they don’t necessarily want to be in with all of the happy adoptions going on,” she said. “We want to give them the space to be open and honest. In the end, that’s what helps us help them and their animals the most.”

The ribbon-cutting also celebrated the opening of the new home of the SQSPCA thrift store, New Leash On Life, located adjacent to the new shelter. Proceeds from the sale of donated items benefit the shelter and the care of the animals.