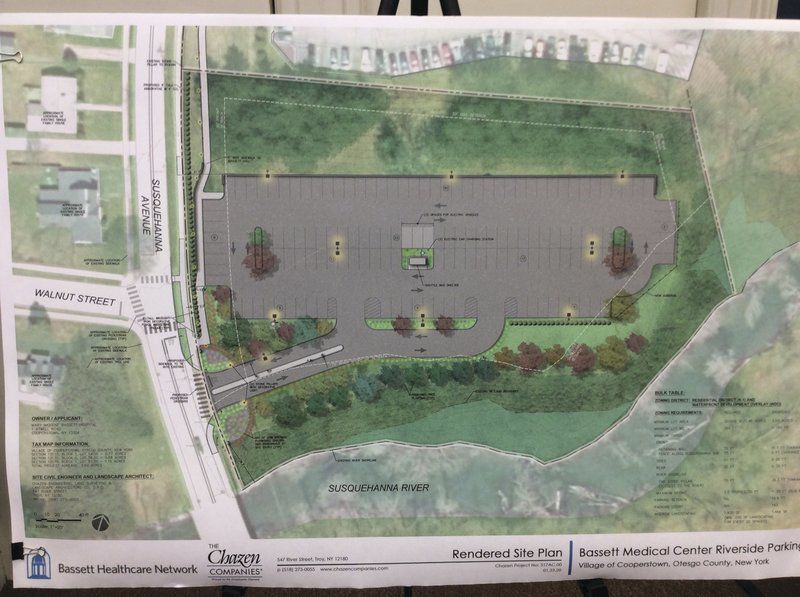 Greg Klein | The Daily StarA rendering of the proposed Bassett Medical Center parking lot is shown Monday, Jan. 27, during a hearing on the proposal. 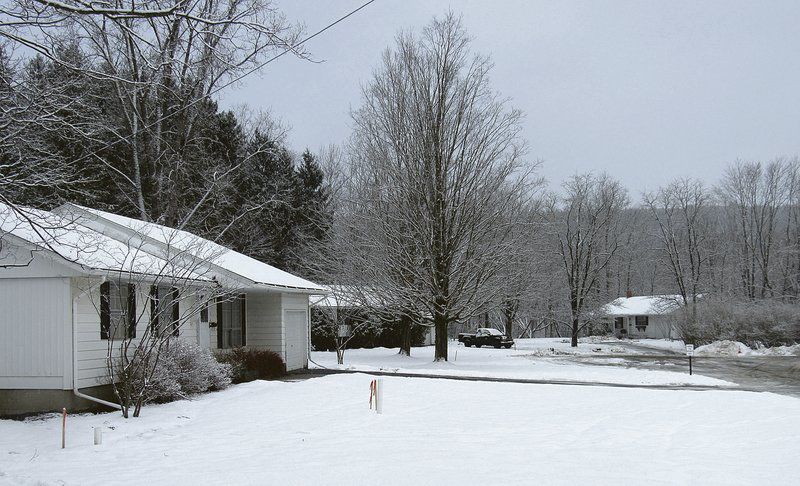 Greg Klein | The Daily StarThree houses on Riverside Drive in Cooperstown are seen Monday, Jan. 27. Village officials are in the process of deciding if the houses can be demolished to build a parking lot for Bassett Hospital.

Greg Klein | The Daily StarA rendering of the proposed Bassett Medical Center parking lot is shown Monday, Jan. 27, during a hearing on the proposal.

Greg Klein | The Daily StarThree houses on Riverside Drive in Cooperstown are seen Monday, Jan. 27. Village officials are in the process of deciding if the houses can be demolished to build a parking lot for Bassett Hospital.

COOPERSTOWN — A 143-space parking lot for Bassett Medical Center employees cleared one hurdle Monday, Jan. 27, when the village Board of Trustees heard public comment on the plan and completed an environmental review.

The proposed project on Riverside Drive, at the end of Walnut Street where it meets Susquehanna Avenue in the southeast corner of the village, would require the bulldozing of three Bassett-owned homes, which were built in the 1960s. The medical center built the homes on the dead end street for resident doctors, and deeded the street to the village for maintenance reasons, according to Bassett officials.

The board held a public hearing at its December meeting on a plan to sell the street back to Bassett, but tabled making a decision until the project had gotten the other special use permits it needs.

Village Zoning Enforcement Officer Jane Gentile told the trustees the Historic Preservation and Architectural Review Board has given provisional approval to Bassett to demolish the houses, which the board deemed non-contributing to the historical architecture in the village, pending the completion of the environmental review and the trustees granting the special use permit.

The village’s Zoning Board of Appeals will hold a public hearing on the project at 5 p.m. Tuesday, Feb. 4, to determine if the parking lot should be granted several zoning variances.

The village’s Planning Board will hold a public hearing on the project at 4:30 p.m., Wednesday, Feb. 19, to do a site-plan review.

Tillapaugh said the board would consider the special use permit at its next meeting, which will begin at 6:30 p.m., Monday, Feb. 24.

About 20 people were at the meeting, including representatives from Bassett and its engineering consultant, Chazen Companies of Troy. Nearly half of the members of the public in attendance spoke about the project. Several people associated with Bassett said they favored the project, which would open up parking for patients by moving employee parking to the new lot.

Bassett President Bill LeCates told the trustees Bassett serves an area of 6,000 square miles and gets 800,000 annual visits to its Cooperstown campus. Because public transportation is mostly not an option in the region, patient parking is an urgent need, he said.

“We think this is a good solution,” he said. “We want to be good neighbors.”

Several speakers said they did appreciate Bassett’s outreach, and only one speaker said she was completely against the project. Several more had concerns about noise and light pollution and the possibility of increased traffic on Walnut Street.

Bassett Network Vice President Jonathan Flyte said the development of Bassett sites in Utica, Hartwick and Oneonta has shifted many administrative and non-care related positions out of Cooperstown in an effort to alleviate parking concerns. He said he thought the new lot would take care of the rest of the parking issues at the center, and no further parking expansion would be needed. He also said Bassett had rejected a plan for a parking garage, in part because it would cost between $38 million and $45 million.

The design of the lot was modified from a previous plan, according to Flyte and Chazen officials, to add green space, put a buffer between the lot and the embankment toward the Susquehanna River, and to move the entrance of the lot away from the Riverside Drive location across from the end of Walnut Street. During the hearing, neighbors on Walnut Street and Susquehanna Avenue also suggested more walled areas to block headlights from shining into nearby houses.