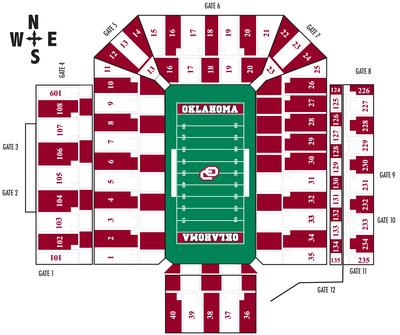 Memorial Stadium at the University of Oklahoma will have a candy-stripped look against Notre Dame this weekend. 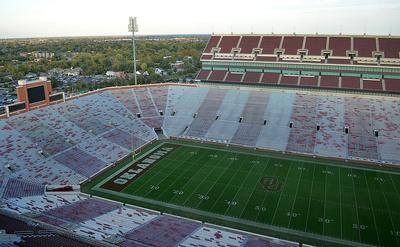 Memorial Stadium at the University of Oklahoma will have a candy-stripped look against Notre Dame this weekend.

Notre Dame's Fighting Irish will be seeing red, and white, when they meet Oklahoma Saturday.

Red and white towels will also be distributed to the fans as they enter the stadium.

Oklahoma's Athletic Department labeled the clothing scheme "Stripe the Stadium" day in hopes of cheering the Sooners to victory.

Oklahoma fans see the game as an opportunity to avenge a historic loss to Notre Dame 55 years ago when the Irish ended OU's 47-game winning streak with an unexpected 7-0 victory in the stadium.

Bud Wilkerson was the Oklahoma coach then, and his team hadn't lost a game since a 1953 defeat by Notre Dame.

Notre Dame is the undfeated team this time, having won its first seven games of the season. OU has lost only one game. Both teams are ranked in the nation's top 10.

The Irish and Sooners have met only nine previous times, with Notre Dame holding an 8-1 winning edge. Oklahoma's only win was in 1956 in South Bend, a 40-0 crushing of the Irish.

It also is a rivalry with a colorful past.

Details for this story were provided by the Norman, Okla., Transcript.