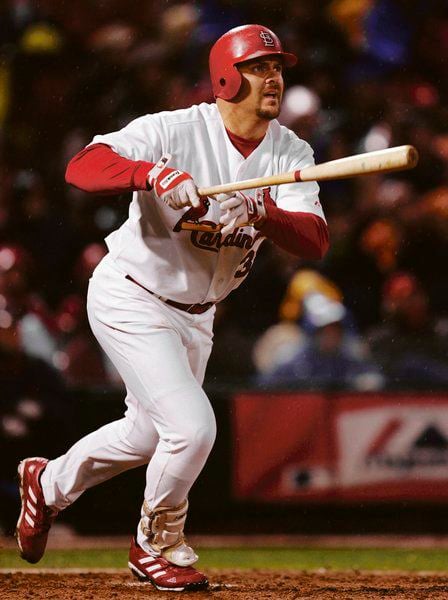 Associated PressIn this Oct. 14, 2004, file photo, St. Louis Cardinals' Larry Walker watches his two-run home run off Houston Astros pitcher Pete Munro in the fifth inning of Game 2 of the National League Championship Series in St. Louis. Walker will be inducted into the National Baseball Hall of Fame and Museum in July. 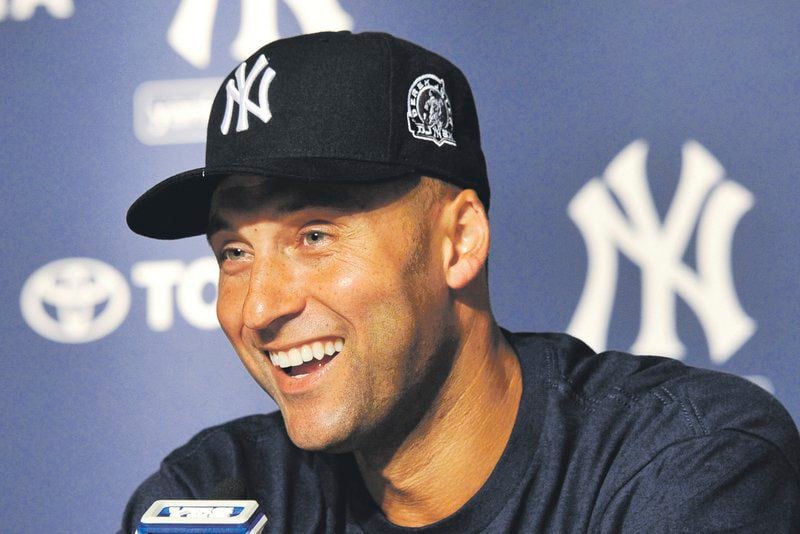 Associated PressIn this July 9, 2011, photo, New York Yankee Derek Jeter smiles as he speaks about his 3,000th career hit at a press conference at Yankee Stadium in New York.

Associated PressIn this Oct. 14, 2004, file photo, St. Louis Cardinals' Larry Walker watches his two-run home run off Houston Astros pitcher Pete Munro in the fifth inning of Game 2 of the National League Championship Series in St. Louis. Walker will be inducted into the National Baseball Hall of Fame and Museum in July.

Associated PressIn this July 9, 2011, photo, New York Yankee Derek Jeter smiles as he speaks about his 3,000th career hit at a press conference at Yankee Stadium in New York.

NEW YORK (AP) — Known for two decades as No. 2, Derek Jeter is now linked to the number 1, as in, who was the lone Hall of Fame voter who didn’t put a check mark next to his name?

For now, the identity and motivation of the non-conformist remains a mystery.

“Well, I look at all the votes that I got,” Jeter said. “Trying to get that many people to agree on something is pretty difficult to do. So that’s not something that’s on mind.”

Longtime shortstop and captain of the Yankees, Jeter appeared on 396 of 397 ballots cast by the Baseball Writers’ Association of America. His 99.7% moved above Ken Griffey Jr. (99.3%) for the second-highest share.

Jeter was listed on all 219 ballots made public by Ryan Thibodaux’s vote tracker before the announcement. The BBWAA will release additional ballots on Feb. 4 of writers who chose a public listing.

“Everyone told me it was a foregone conclusion. I didn’t buy it. So it was not a relaxing day. There was a lot of anxiety,’’ Jeter said. “I was nervous, sitting around waiting for a phone call is something that is completely out of your control.”

Walker got 304 votes, six above the 75% needed and up from 54.6% last year. He was making his 10th and final appearance on the BBWAA ballot and tweeted earlier in the day “I believe I’m going to come up a little short today” after checking the vote tracker and projecting he would finish at 73.3%.

As the announcement time approached, Walker had just about given up.

“I had it when they’re going to call, a roundabout time, and that time had come and gone,” he said. “And there was two minutes after that when the call actually came.”

When Walker’s phone rang, he uttered a profanity and then: “Oh my God!” He answered, and BBWAA secretary-treasurer Jack O’Connell was on the line.

“You didn’t come up short this year. You passed the 75% threshold, and welcome to the Hall of Fame,” Walker remembered O’Connell telling him.

Pitcher Curt Schilling was third with 278 votes (70%) in his eighth ballot appearance, an increase from 60.9% but still 20 votes shy. The steroids-tainted pair of Roger Clemens (61%) and Barry Bonds (60.7%) both showed slight increases in their eighth tries. Clemens rose from 59.5% last year and Bonds from 59.1%.

Jeter and Walker will be inducted on July 26 at the Hall in Cooperstown along with catcher Ted Simmons and former players’ association head Marvin Miller, who were voted in last month by the Hall’s Modern Era Committee.

A five-time World Series champion, Jeter became a face of baseball as he starred in the nation’s largest media market from 1995-2014. He was the AL Rookie of the Year in 1996 as the Yankees won the World Series for the first time since 1978, then led New York to three straight titles from 1998-2000, the only team to accomplish the feat since the 1972-74 Oakland Athletics. The rebuilt Yankees added their 27th title in 2009.

“I had a great relationship and still do with Reggie Jackson,” Jeter said. “And Reggie used to constantly remind me when he when he came to the park, he’d always tell me, `You’re not a Hall of Famer yet.’”

Jeter defined himself by moments more than numbers: his unexpected backhand flip from foul territory to throw out Oakland’s Jeremy Giambi in the 2001 AL Division Series; his Mr. November home run in the 10th inning that won Game 4 of the 2001 World Series; his face-first leap into the stands after catching a 12th-inning popup by Boston’s Trot Nixon in 2004; his home run into the left-field bleachers for his 3,000th hit as part of a career-best 5-for-5 game in 2011; his ninth-inning walkoff single in his final home game in 2014; his last at-bat single three days later that lifted his career average to .310.

Drafted sixth overall in 1992 after he was spotted by Yankees scout Dick Groch as a high school junior a year earlier, Jeter was bypassed by Houston (Phil Nevin), Cleveland (Paul Shuey), Montreal (B.J. Wallace), Baltimore (Jeffrey Hammonds) and Cincinnati (Chad Mottola). He debuted for the Yankees on May 29, 1995, and was installed at shortstop the following spring training by new manager Joe Torre.

Jeter became a 14-time All-Star and five-time Gold Glove winner despite defensive metrics that were maligned. He was appointed captain by owner George Steinbrenner in June 2003, filling a position that had been open since Don Mattingly’s retirement after the 1995 season. He finished with 3,465 hits, 260 homers, 358 stolen bases and 1,311 RBIs, earning $266 million from the Yankees.