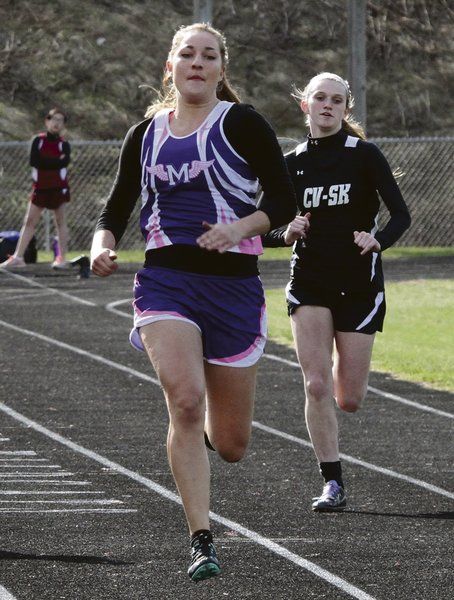 Cheryl CloughMilford's Line May Christensen leads CV-SK's Kaitlyn Stinson in the 100 during an April 21 meet. 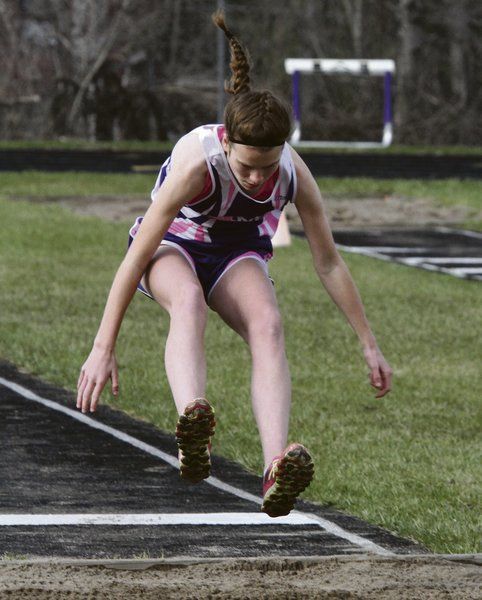 Cheryl CloughMilford's Line May Christensen leads CV-SK's Kaitlyn Stinson in the 100 during an April 21 meet.

The Milford Wildcats may not be the biggest track team in the league, but what they lack in numbers, they seem to make up for in determination and ability.

The girls team, coached by Gabrielle Pedersen, look poised to win the Tri-Valley League this year, after coming in second last year by one and a half points.

Pedersen spoke enthusiastically about her team’s prospects this year. The second-year coach is optimistic about the girls’ potential for a winning season, citing their skills and their dedication.

“I’m ecstatic for our team this year,” Pedersen said. “They have a lot of individual goals, but they have goals for the whole team in mind when they’re competing.”

The girls have run in freezing miserable weather with no complaints, according to Pedersen. They’re so motivated they’re willing to do anything. One obstacle facing Pedersen this season was the loss of Keira Higgins, who graduated last year.

“She was my ‘distance team’ so I was nervous we would lose my distance squad, but I have three girls who stepped up to the plate,” Pedersen said.

Emilie Mertz, who holds five MCS records, will do middle and long distances. Freshman Lauren Saggese and Brianna Rumovicz make up the rest of the distance team, and Pedersen said they are running great times as well.

Pedersen also pointed out her exchange student from Denmark, Line May Christensen, as an outstanding performer this year.

“She is so strong, so powerful; so far she is undefeated,” Pedersen said. “She’s always asking for advice and she really listens and does anything she can to be better.”

Hannah Baker contributes a great deal to the team, too. She’s its only thrower, but fortunately for the Wildcats, Baker has been throwing extremely well.

The one place the girls are not strong is in the relays. The girls have the bare minimum to run them, and it takes away from their individual events. Pedersen said that’s been a struggle, but her hopes for the team in general are very high.

Last year the loss to Richfield Springs was a tough blow, but Pedersen is confident this year they will end the season as winners.

“I really feel like we have the potential to do very well this year. The way we’ve been performing, I think we have the capability to go all the way,” Pedersen said.

Prouty has a particular challenge this season given that his team is relatively new.

“Well, I’ve got a very small boys team this year, so numbers are an issue, and they have very little experience,” Prouty said. “Only four have run track before.”

Good news is one of those four is Brian Atwell who throws discus and shot put. Equal to his athletic skill is his ability to motivate his teammates.

“He does everything you would hope a senior would do. He’s a great leader to the rest of the boys, and he’s really improving in his events,” Prouty said.

Prouty is also looking for good things from Peyton Griffiths. He is a newcomer to the track team, but he’s already throwing extremely well. Griffiths, along with some other track team members also is playing baseball this year which means having the whole team at every practice is an impossibility.

Also doing both sports is senior Paul VanWarner, the leading jumper and a sprinter, too. According to Prouty, VanWarner is the leading triple jumper in the league as well as holding the best long distance jump. Tim Hall, a freshman is also looking good. Prouty said he’s learning the ropes, and gets better at every meet.

Prouty points out Cherry Valley-Springfield and Edmeston as the toughest competition this season, although he doesn’t discount Downsville who combined their sports teams with Roscoe this year, and competes in the Tri-Valley for track.

“We should do well, but given our lack of experience, this year will be more of a building year for my team,” Prouty said.