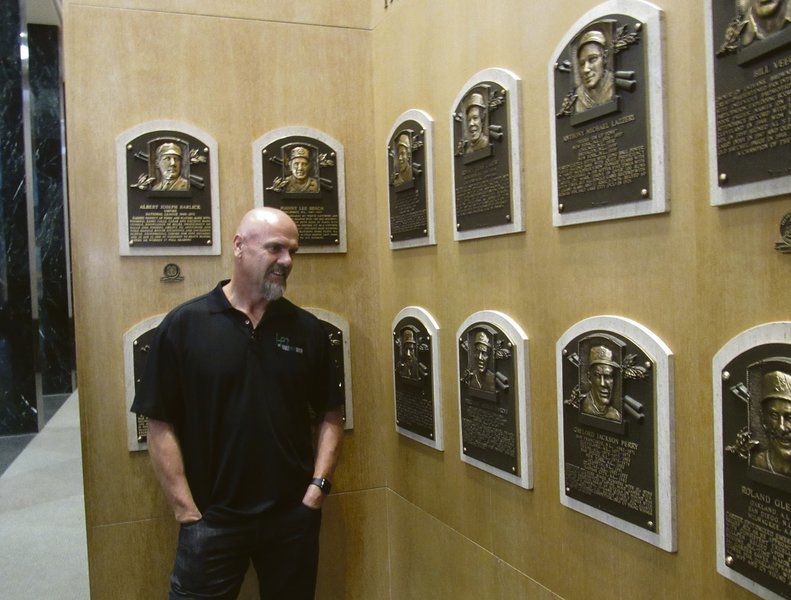 Greg Klein The Daily StarLarry Walker looks at the plaque for Ferguson Jenkins during his orientation tour Tuesday, Feb. 25, at the National Baseball Hall of Fame and Museum in Cooperstown. Jenkins was the first Canadian to be inducted into the hall, but in July, Walker will become the second. 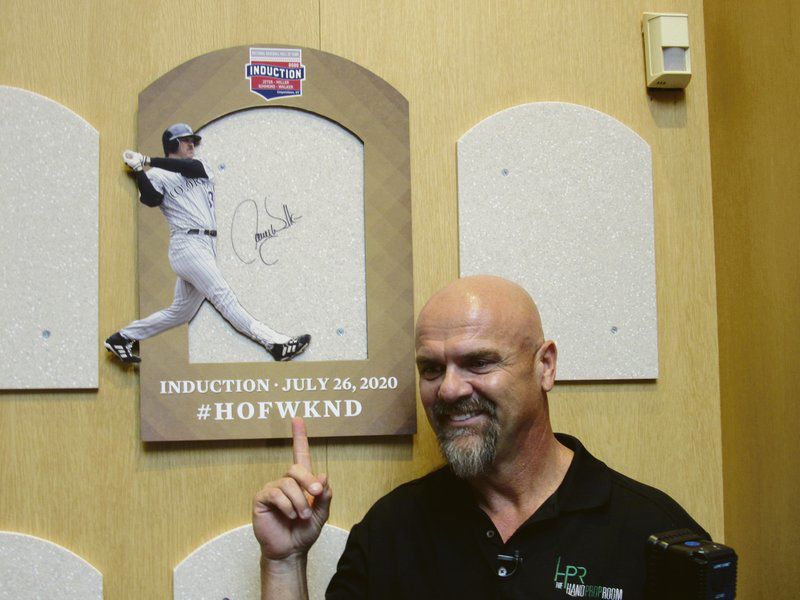 Greg Klein | The Daily StarLarry Walker poses Tuesday, Feb. 25, after signing the spot where his plaque will be hung in July at the National Baseball Hall of Fame and Museum in Cooperstown.

Greg Klein The Daily StarLarry Walker looks at the plaque for Ferguson Jenkins during his orientation tour Tuesday, Feb. 25, at the National Baseball Hall of Fame and Museum in Cooperstown. Jenkins was the first Canadian to be inducted into the hall, but in July, Walker will become the second.

Greg Klein | The Daily StarLarry Walker poses Tuesday, Feb. 25, after signing the spot where his plaque will be hung in July at the National Baseball Hall of Fame and Museum in Cooperstown.

COOPERSTOWN — Larry Walker smiled Tuesday, Feb. 25, as he stood in front of a plaque bearing the likeness of Ferguson Jenkins — the first Canadian inducted into the National Baseball Hall of Fame and Museum. And then something uncharacteristic happened to the charismatic outfielder: he became speechless.

"To be the first position player, the second Canadian ... man, I can't find the words. I'm just stuttering around here, because I don't know what to say," he said.

A few moments later, when he learned how close he would be to the Hall's "first five" class of 1936, and then went to sign the spot where his plaque will be hung following his Sunday, July 26, induction, he choked up.

"I feel just like I won a lottery ticket. I get to have you show me around the Hall of Fame," he told Hall of Fame Vice President Erik Strohl, who gave him his orientation tour, "allowing me to hold Babe Ruth's bat and everything. I'm so lucky."

Walker, from Maple Ridge, British Columbia, grew up as a hockey lover from an athletic family. However, he said he washed out of top level juniors in Regina, Saskatchewan, and a voice in his head told him not to accept a demotion. A couple of years later, he said he lucked into baseball, a sport his dad had played at a small-time level.

He signed with the Montreal Expos in 1985, and they assigned him to their Utica Blue Sox team in the New York-Penn League. He struggled to hit in Utica, and the team was attempting to play him in the infield, but a winter league assignment after his rookie season helped launch Walker's career.

He will be the first Colorado player inducted into the hall, and said he hopes he makes it easier for Rockies players to be considered for induction.

Walker said playing in Utica and at other minor league stops was more important for him than for most players, because he was just learning the game.

During his Blue Sox season, he said, he visited Cooperstown with his parents, but he had forgotten about the visit until his mom called and reminded him after the Jan. 21, announcement of his selection by the Baseball Writers' Association of America voters.

"She called me and she goes, 'I don't know if I am losing my mind, but I swear we went to the Hall of Fame when you played in Utica,'" Walker said during his post-tour media conference. "And then I was going through some pictures, and I was trying to find some things for here, to put them on the display, and the first thing that I open is a picture of my mom and I standing in front of some plaques, with me with some really goofy half-uniform shorts on and a shirt that was cut off. You know I don't know what I was wearing, and mom looking, you know, 30 years younger."

Walker's selection came on his 10th and final year on the Baseball Writers of America Association ballot. To be inducted, players need to be picked on 75% of the ballots; Walker made it in with 76.6% of the vote. He said he is into numerology, and the number 3, so being the 333rd played to be inducted, made the wait make sense to him.

Going in as part of a class that includes Derek Jeter, as well as Modern Baseball Era Committee selections Marvin Miller and Ted Simmons, will turn the wait into a special weekend, he said.

"With Derek, it makes it easy for Ted and I, for sure, because I think a lot of people are going to be here to see Derek Jeter," he said.

"Honestly, I have been so nervous about it, but part of me is also so excited," he continued, "because I can't wait to experience what it is going to be like, and see what happens, and hopefully see a lot of Canadian flags flying out in the field."